“The story is particularly well-told by someone who followed in these women’s footsteps and served as an Air Force flight nurse and who for many years has studied the records these brave women left behind. If ever a book cried out to be made into a movie, it’s this one.”

“And unlike some other, purely narrative-oriented bibliographic books devoted to Army nursing in the Second World War, Barger addresses the particular gender-biases and expectations directed toward female military personnel from both within and without the military. … The ensuing balance between accomplishment, dedication, prejudice, and misplaced identity that Barger covers makes Beyond the Call of Duty a valuable addition to the literature of military nursing.’

“Carefully written with solid organization and pacing, Beyond the Call of Duty is an excellent account of a small but essential component of the American army’s success in World War II. Barger has done a great service in telling the story of the first flight nurses, and in so doing has honored the same Flight Nurse Creed she recited in her career: ‘I will be faithful to my training and to the wisdom handed down to me by those who have gone before me.’ (p. 57).”

And from the book jacket for Beyond the Call of Duty:

“A significant addition to the history of women in World War II, to the Army Nurse Corps, and to nursing history in general.”

“We live in an era where women flying commercial and military aircraft is commonplace. Judith Barger’s Beyond the Call of Duty reminds us that the sacrifices these women made set the groundwork for the opportunities women in the military and airline professions now enjoy. A wonderful, informative read.”

Elizabeth M. Norman, author of We Band of Angels: The Untold Story of American Nurses Trapped on Bataan by the Japanese 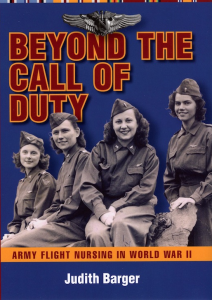