Detroit Company A of the Third Wing, Fifth Division was one of the more active Aerial Nurse Corps of America (ANCOA) units. 1 Its success may be attributed in large part to the efforts of Company Commander Captain Leora B. Stroup. A registered nurse employed in nursing education, Stroup knew when she saw the female pilots at the National Air Races in Cleveland in 1929 that she, too, wanted to fly. A few years later in 1933 she earned her pilot’s license at the Cleveland Airport, where she met pilot and ANCOA founder Lauretta Schimmoler and, like Schimmoler, later was inducted later into the Ninety-Nines, the national organization of licensed women pilots. 2 Stroup was also a member of the Civil Air Patrol and the National Aeronautic Association and held national offices in ANCOA, serving first as its treasurer and quartermaster and later as its director of nursing. In 1941 Schimmoler appointed Stroup ANCOA president. 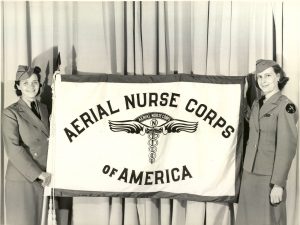 Stroup described the Detroit Company of ANCOA, the first in the mid-west, as one of her “pet projects”, and by 1939 the company had its full quota of fifty-six women of whom thirty were registered nurses. 3 The rest of the women served supportive roles in first aid and communications. Members met every Wednesday night in the Saint Joseph’s Hospital Training School auditorium for their classes and on Sunday afternoons at the local airport where they made flights with Stroup or with an Army reserve pilot who was assisting the ANCOA unit. Eight of the nurses were themselves pilots, but piloting planes was not an ANCOA duty. Rather, members were taught enough about aviation to determine by ground inspection whether a plane was airworthy and were taught about weather conditions relevant to flight as well. 4

Eileen Newbeck, a member of Detroit Company A, recalled:

We did have a group of Aerial Nurse Corps members. It was controlled by the group over in California, Leora Stroup was the captain of our group. We had military rank. We wore uniforms. It was a grey-blue uniform. We wore a regular overseas cap. We did first aid in the area at all the air meets, whether it was the model air meets and or whether we went up to Cleveland and did the first aid at the National Air Races. We met every month, and we were connected with an airfield. And if there were any patients in the area that needed movement to hospitals or back home, we took them by air. 5

What Newbeck remembers about ANCOA confirms information found in organizational literature and in the press at the time. On the lighter side, ANCOA members had a social life as well. Dancing seemed to be a favorite activity, and Company A was no exception. Newbeck made news in the local paper as the chairman of the committee planning a dance in 1940 to raise money for the national membership campaign. The spring dance appeared to be an annual event not only in Detroit, but also in Dayton, where the first annual aviation ball of the Dayton Tri-Flyers Club, which included ANCOA Company C of Fifth Division, in 1940 drew 500 people and in Los Angeles, where Company A of the First Wing, First Division was sponsor of the annual aviation ball for 1939, in which all aviation organizations in Southern California participated. 6

Declining membership in ANCOA in general and in Detroit Company A in particular may have been a problem as early as 1939, for Stroup told a reporter for the Detroit Evening Times that “the corps served as a recruiting agency for airline hostesses. The Detroit unit has already lost one member to an airline and is about to lose another”. 7 A year later Margaret Quinn, a private duty nurse in Detroit Company A, wrote to the War Department, Michigan Military Area, indicating her willingness to serve her country as part of the United States Army Air Corps, citing her air ambulance work as justification. 8 The wording in this letter suggests the possibility of an ANCOA campaign to seek military flight nurse positions for its members. By 1941 ANCOA had lost Quinn to the United States Army as a nurse stationed at Fort Custer in Michigan. 9 In his January 1941 reply to a letter from Stroup, John G. Slevin, Medical Officer for the United States Army, Headquarters Michigan Military Area, told her that “No doubt, within the next year the first Reserve will be badly depleted by call to extended active duty with the Army. Hence, your organization will lose many of its present members.” He suggested that the ANCOA should continue to function, filling its ranks with American Red Cross (ARC) Second Reserve nurses as an important valuable aid to home defense work. 10

With units like Detroit Company A leading the way, by 1936 the ANCOA had become an active organization, and in 1937 Schimmoler, who was its president and national commander, began to contact key personnel in the United States Army to seek recognition of her flight nurse organization. Schimmoler went straight to the top in an apparent effort to discuss her plans with Brigadier General Henry H. “Hap” Arnold, Acting Chief of the Air Corps, who replied:

Just a note to express my regret that I didn’t get a chance to see you while out on the Coast and talk over the program of the Aerial Nurse Corps of America. I hope, however, to discuss the subject with you in detail. I believe there is a place in the scheme of things for such an organization, but just what that place is I will be unable to definitely decide until I know more of the details. 11

Although Schimmoler surely found encouragement in this initial correspondence, it was destined to be short-lived, for a month later when Arnold had learned more of the details, he advised her:

I do believe, however, that inasmuch as the American Red Cross has been designated by law (Army Regulation 850-75) that this organization is in effect in time of emergency an auxiliary aid to the Medical Department of the Army, it would be advisable that you should work in conjunction with that organization. 12

Arnold enclosed a copy of Army Regulation 850-75 “Employment of American National Red Cross” to acquaint Schimmoler with the provisions of this regulation. Arnold’s advice apparently had come indirectly from Major Julia O. Flikke, Army Nurse Corps Superintendent. When Arnold asked Colonel Malcolm C. Grow, Chief of the Medical Section, to draft a reply, Grow in turn sought input from Flikke, whose memo to him used wording that Arnold incorporated into his final letter. Not appearing in Arnold’s letter was Flikke’s belief that “Miss Schimmoler’s plan is very complete and would be of great value if it could be used but it would conflict with the present set up if carried on independently.” 13

The Red Cross serving with the armed forces and under the orders of the President is the only voluntary society authorized to render aid to the Medical Department of the Army. Any other society desiring to render similar aid can do so only through the Red Cross. 14

It was under the aegis of this regulation that the ARC worked closely with the Army Nurse Corps to recruit nurses for service in the Army. Nurses enrolled in the First Reserve of the ARC constituted the pool of qualified applicants from which nurses were drawn to expand the nursing service of the Army as needed. Requirements for enrollment in the ARC First Reserve were stated in that organization’s literature. 15