Lee (Ivalee) HOLTZ (University of Texas School of Nursing, Galveston, 1942) entered the military in 1942 after Pearl Harbor was attacked, with the intention of being a flight nurse. Arriving at her first duty assignment at Hammer Field in Fresno, California, she applied for flight nurse training immediately and worked as a psychiatric nurse for a year before her orders for Bowman Field came through. She graduated from the flight nurse course on 26 November 1943. Holtz was assigned to the 801 MAES with duty assignment in the Pacific; her squadron replaced the original members of that squadron who were rotating back to the United States in 1944. 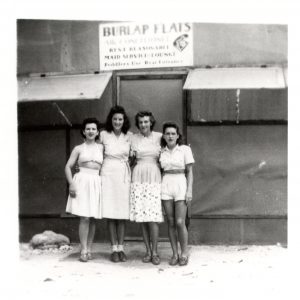 After relying on written notes for my first three interviews, I was delighted when Lee agreed to talk on tape. Friendly and easygoing, Lee clearly enjoyed her work as a flight nurse during the war and shared fond memories of many experiences. She had learned not to let the inconveniences of wartime living upset her and to make the most of what she had to work with as far as patient care and personal comfort. Once I realized that the tape was running and I needn’t take notes, I sat back and enjoyed the interview with an obvious enthusiasm for what Lee was sharing about her time as a flight nurse. I learned that an interview could be both informative and enjoyable. Like Alice Krieble, Lee stayed in the military after her assignment as a flight nurse had ended. She retired as a lieutenant colonel in the US Air Force and died in 1992 at age 75.

To listen to my interview with Lee Holtz, click on the link: