The Fourth in a series of Blogs about the 31 Medical Air Evacuation
Transport Squadrons activated during WW2
to provide inflight nursing care to sick and wounded soldiers,
tended by Army flight nurses and enlisted technicians.
The focus is on the flight nurses.

Of special interest to the press were the maneuvers in which the flight nurses took part with other members of their MAETS, an aspect of training that provided numerous “photo ops”, many undoubtedly arranged by the base’s public relations office. In a weekend bivouac the flight nurses learned tent pitching, military sanitation, and camp discipline. They next went out on 3–day maneuvers to apply the practical aspects of their didactic instruction, but now experienced under simulated combat conditions. 1 Humorous incidents of flour bombs dropped on troops not sufficiently camouflaged and nighttime raids on unsuspecting sentries taught the flight nurses serious lessons about protecting themselves from the enemy once overseas. 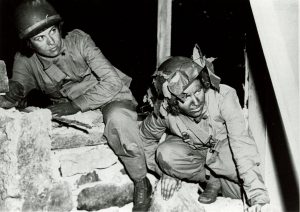 The second flight nurse class, of which Leora Stroup was a member, went on bivouac a few days before their graduation ceremony. The critique prepared by Stroup and classmate Grace Dunnam, later chief nurse of the 806 MAETS, offers a firsthand account of bivouac. While marching approximately 5 miles with field equipment, the nurses encountered 2 surprise “gas” attacks requiring use of chemical warfare gear. Upon arriving at their campsite, the foot-weary women pitched their tents after watching a tent-pitching demonstration. They did not have to dig their own latrine but did dig an “ablution trench” for their own use, filling it with water brought in buckets from a nearby farmhouse. The nurses received on-the-spot instruction about mess management and “chow line” formation. Other demonstrations covered the Lyster bag for chemically purified water, improvised first aid, and guard duty. 2 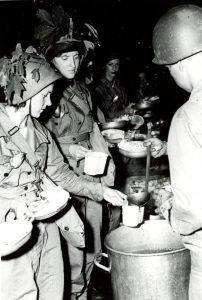 At the end of bivouac, officers took down their own tents. The 6 nurses who did not report for roll call at 6:15 that morning had to police the nurses’ area for trash. Before departing, all officers walked the length of their area in line, picking up paper and lost articles; they then returned to base. Missing tent ropes, which would have been caught had equipment been checked before starting, and the need for more practical clothing such as thick-soled shoes for marching, 2–piece coveralls for women, and bed socks were 2 of the problems that Dunnam and Stroup identified in their critique. 3 Once Stroup had progressed from student role to that of instructor, she added “Recreation – singing by campfire” to the bivouac activities for the third flight nurse class. 4 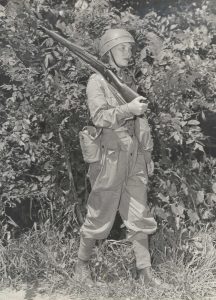 After June 1943, nurses were assigned to their MAETS before attending the flight nurse course, giving the squadron of flight surgeons, flight nurses, enlisted technicians, and support personnel a longer time to “gel” – to build esprit de corps – and to become acquainted with each other and with their duties before shipment overseas. Together they accomplished administrative tasks, post-graduate training while still at Bowman Field that included additional bivouacs and other field maneuvers, and procurement and preparation of equipment and supplies for overseas shipment. For flight surgeon Morris Kaplan, 803 MAETS commander whose squadron was destined for the CBI, it was “an opportunity to weed the boys from the men, and the crocheter from the real women.” 5 The time could also provide opportunities for squadrons to perfect their air evacuation skills on stateside missions when the need arose.

Flight nurse Louise Anthony of the 816 MAETS gave a humorous account of her classmates, who graduated in January 1944, pitching their tents in the frigid January temperature when on bivouac. It took all day to issue the “armloads” of field equipment – tent pegs, shelter halves, mess kits, canteen and its holder, flashlights, clothing – “everything imaginable” – to their large class.

Then they announce, “All right, fall out in the morning with all your field equipment, and we will show you how to put it together.” The weather was so cold, we all wore at least 2 sets of underwear and our slacks, plus any outer clothing we could put on top. And we fell out. It was dark. These 4 squadrons lined up … and frequently someone would drop a tent peg, and we’d giggle. And they’d bend over to pick up the tent peg and drop their canteen or something else. And then somebody else would try to help pick up one of the things dropped, and she would drop something. And [Edith] Jackson was standing out in front. Each of the flight leaders was standing in front of the squadrons to take the morning report and turn and give it to Jackson, who would turn and give it to the captain standing behind. And Jackson was yelling out periodically, “Attention!” which couldn’t be had under the circumstances very easily. And finally she yelled out, “You are supposed to fall in at attention!” And then she added, “To the best of your ability.” The captain behind Jackson doubled up laughing – was almost on the ground laughing. …

Then when we did go out, … the captain who was in charge said … “Is anyone cold?” And there were about 20 of the girls [who] said, “Oh, I’m freezing! Oh, it’s so cold, I’m dying!” And I thought, Jiminy Christmas, why can’t they keep their mouths shut? And all of a sudden he said, “All right. Everybody fall into line.” And he ran us around the field about 4 times – to warm us up. 6

The flight nurses of Anthony’s 816 MAETS eventually found themselves dealing with a cold British winter during the buildup to D Day and Operation Overlord.

Bivouac was only one type of maneuvers or military training exercises in which flight nurse students participated. Even more demanding than the wartime scenarios encountered during bivouac at Bowman Field may have been the daytime infiltration course at nearby Fort Knox. Flight surgeon Kaplan, who observed the progress of the 803 MAETS flight nurses through the infiltration course following their graduation from training in May 1943, concluded: “I felt that if all 25 girls could take that beating, then I could take them anywhere. I had just finished it myself through much less dust than they and had wanted to quit a dozen times. It was certainly the hardest physical work I had ever done as it consisted essentially of doing 150 pushups and the temperature was 105.” 7 The 803 MAETS flight nurses filled their remaining days at Bowman Field gaining proficiency on the firing range and behind the steering wheel of jeeps and trucks. They also learned the intricacies of packing a parachute. Months later 1 nurse in that squadron had reason to recall this lesson – and the instructor’s sarcastic comment that if her parachute failed, she could always exchange it – when she had to put it to the ultimate test over the mountains of China. 8 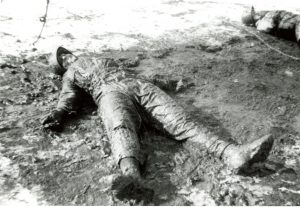 Katherine Hack related the performance of the 821 MAETS flight nurses on that course the day after the squadron’s return from bivouac. Members of the press had arrived to “take in the atmosphere. One, a Mr. Parsonette, connected with one of the film studios, was invited to join us. For he had been flickering off and on in the background since bivouac, and some time before that. He very suavely replied that being a man he would be unable to truly capture a feminine reaction to going through the infiltration course. He was assured that the experience he would find there knew no sex.” The nurses

rolled, crawled, wiggled and slithered through the mud, under barbed wire through the [ditches] abundant with water, to the staccato refrains of the machine guns. When the final ditch was completed, we truly were a sight to behold. Our fatigues were soaked with a most tenacious variety of Kentucky mud. From this day on we ceased to refer to ourselves as ‘Female Cadets’ thinking ‘Female Commandos’ more fitting. 9 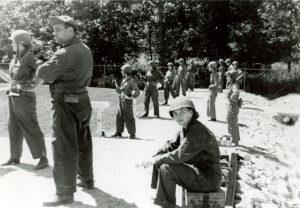 For some flight nurses the interim between earning their wings and participating in air evacuation in the “real world” seemed like an eternity. The first verse of the “803rd Lament”, written by Lieutenants Elsie Ott and Georgia Insley “while lying on cot waiting final movement orders at Bowman Field, Kentucky, July, 1943” and sung to the tune “It Ain’t Necessarily So”, depicts the sense of limbo in which the newly minted flight nurses sometimes found themselves:

The Squadron is ready to go
But orders are coming in slow.
We wait without ranker
To get on a Tanker
Because we are ready to go. 10

Orders could be slow in coming, as the 11 verses of this lament suggest. But the time finally arrived when each MAETS left Bowman Field usually by troop train – often under cover of darkness – on secret orders to a staging base on the east or west coast to await shipment overseas.

For more about flight nurse and MAES training, see Beyond the Call of Duty: Army Flight Nursing in World War II, Chapter 3 and Chapter 4. For more about Louise Anthony de Flon see Blogs posted for 6 Jun 2016 and 10 Oct 2020.

An audio recording of my interview with Louise de Flon is available at: