I interviewed Agnes in her hotel room the last day of the World War II Flight Nurses Reunion at Cocoa Beach, Florida. Agnes was a member of the 807 MAES and one of the 13 nurses aboard the plane that, hampered by weather conditions, wound up in enemy-occupied Albania during World War II. She and the other flight nurses aboard had one of the most unique experiences of the war when they escaped and evaded the Germans for over two months before reaching friendly soil. For quite some time I had wanted to interview a nurse who had been among this group. Agnes mentioned that because some years ago she had contributed all the information she could recall from her Albanian experience to help a person writing a book about combat nurses (Wyatt Blassingame and Gil Walker, Combat Nurses of World War II, Random House, 1967), she was probably a good person for me to interview. I gladly agreed.

While Agnes had a wealth of information that she freely and easily shared, it was not necessarily in logical order. Since I’d read about the Albanian experience, however, I fortunately could follow her train of thought and fill in what had not been said. Thirteen nurses and 13 enlisted technicians were en route to two forward locations in Italy, from which they would start evacuating patients, when their plane was forced down in enemy territory because of bad weather and low fuel. All survived but spent two months making their way back to Allied territory. As the senior-ranking nurse in the group, Agnes was the person with whom the aircraft commander talked about any issues involving the flight nurses. She still remembers vividly the details of that experience.

What I didn’t anticipate was the interruptions during the interview—people coming to the door to say good-bye, for example—and I brought the interview to an end a bit sooner than I wanted.

One of Agnes’s stories: Agnes can remember sitting in the cabin of the plane before it was forced down onto Albanian soil. She didn’t know her nurse colleagues all that well, because she’d joined the squadron later than the others; she hardly knew the enlisted technicians. She sat in her bucket seat and observed them all. She wanted to get up and check the Mae Wests hanging in the back of the cabin, but was afraid of creating panic. Agnes was scared, she admitted, but she sort of resigned herself to the situation. She took another look at her squadron mates, “and with that I kind of smoothed out these musette bags next to me, and I loosened my belt just a little. And I kind of slid down, and I thought, Well, what the hell. I’d rather be sleeping.” She must have dozed off, she said, for when the pilot stuck his head out of the cockpit door to say they were going to make a rough landing and to buckle up, she asked her seatmate where they were going to land. The flight nurse smiled and replied, “On the ground, I hope.” Agnes laughed at the memory.

At the time of our interview, Agnes was writing a book about her experiences in Albania during World War II, which was published by The University Press of Kentucky in 1999 under the title Albanian Escape: The True Story of U.S. Army Nurses Behind Enemy Lines. 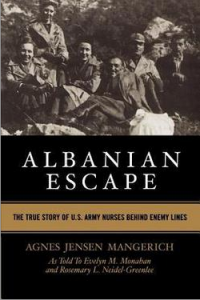