The novelty as well as the professionalism of the World War II flight nurse sold the air evacuation program to the general public, helped in great measure by media portrayals of flight nurses in articles often given a catchy title – “These Angels Fly on Man-Made Wings,” “Hell’s Angels,” “Invasion Heroine: The Flying Nurse,” “Angel Footprints.”

In its effort to ameliorate the grimness of war, the media tended to glamorize the work – and the appearance – of flight nurses. In an early cartoon found on the back cover of Yank magazine for 1 September 1942, two male patients in hospital beds watch as a young, pretty, slim nurse, dressed in the conventional white uniform and cap and holding a medication tray, flies over their heads. The caption reads: “Must be one of those new flight nurses that were just transferred here.” 1 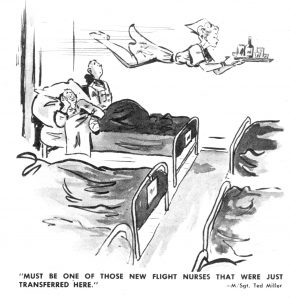 A cartoon in the July 1944 issue of Air Force magazine, pictures a G.I. combing his hair and straightening his tie while four litter patients watch Flight Nurse Nelson going about her business on an air evacuation flight. The caption reads: “Since the ‘Angels of Mercy’ were put on flying status there has been a marked improvement in the mental attitude of patients being removed from forward combat areas. A sick man’s spirits automatically rise at the touch of a kindly and competent feminine hand. Flight Nurse Nelson is the pin-up as well as patch-up girl of each troop transport she boards these days.” 2 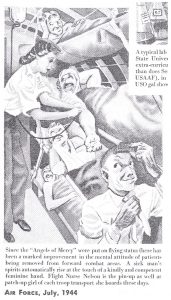 “I cannot seem to speak of flight nurses without sounding like a blurb for a flock of movie stars,” wrote Maxine Davis in a book about aviation medicine in World War II. “Frankly, I found the Army Air Force flight nurses tops. They were gay, friendly, loved their jobs and performed them efficiently, and they were beautiful. I am convinced the officials of the School of Aviation Medicine measured them, photographed them, and voted on them as for ‘Miss America.’ They were, incidentally, healthy, courageous, and stout of heart.” 3 Helena Ilic was just one of the numerous flight nurses meriting Davis’s accolades. Read more about Helena and her flight nurse colleagues in Beyond the Call of Duty: Army Flight Nursing in World War II. 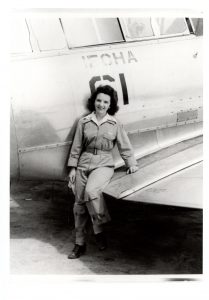 The reference to Miss America brought instantly to readers’ minds the image of an attractive female who has risen above her competition as the epitome of all that is good in a young woman. But because beauty did not necessarily equate with courageous action, correspondents tempered their descriptions with behavior indicative of patriotism and fortitude. And if a photograph of the nurse in uniform could be shown, it reinforced the message. Such was the case in “A Heroine Comes Home,” with its subtitle “Boston Army Nurse Typical of The REAL Miss America,” an article about flight nurse Lieutenant Barbara Watts, who served with the 802 Medical Air Evacuation Squadron (MAES) and later with the 807 MAES in North Africa and Europe. Watts was, the correspondent said, “typical of the Miss Americas who served so well in the various theaters of war. Thousands, like Lt. Watts, are turning back to civilian life with records that rival those of the men.” 4

Other publications may not have focused as overtly on the flight nurses’ femininity, but the message was clear in title and in text: the presence of female flight nurses in forward areas and on air evacuation missions had a positive effect on the morale of the troops who might suffer or already had sustained combat wounds or related illnesses. Official military publications also stressed the positive effect that female flight nurses had on their patients’ morale. Because many soldiers were taking their first flight, a young, female nurse calmly going about her duties was a reassuring sight. 5

The public already had read of the glamour associated with nurses working as airline stewardesses. By association, military flight nurses took on that same glamour in the press, but with an important difference – the well-known image of nurses as “angels of mercy” was given a new twist. “These Angels Fly on Man-Made Wings,” read the title of an article in the Sunday supplement to the Louisville Courier-Journal the week after the first flight nurse graduation. The wings, of course, were airplane wings. Wounded soldiers would “be opening their eyes to a sight both pleasant and welcome, but which is just about the last thing they’d expect to see so near no-man’s land” – attractive flight nurses wearing the insignia of second lieutenants. Given the effusive tone of their article, the authors may have thought it necessary to add, “Because being a flight nurse has glamour appeal, entrance into the school is difficult so as to keep out those who would enter purely through the love for adventure.” 6

The closing caveat was apt. Capitalizing on this love of adventure in Women in Aviation, a book written at the end of World War II, Becky Peckham concluded her chapter about flight nurses: “Air Evacuation seemed to be the perfect answer for those girls who ‘didn’t join the Army Nurse Corps to take care of people with measles.’” 7

Under the opening, “They flew into South Pacific combat zones under the noses of Zeros, crouched long, dark hours in foxholes, sweated out blistering beachhead bombardments and came up with the kind of courage that brought smiles to the faces of the sick and wounded,” Collier’s printed a rare article that downplayed femininity and emphasized brawn over beauty in these flight nurse “Amazons.” 8 A photo spread of flight nurses in the Pacific was more balanced in its concise depiction of these women and their work in air evacuation: “They are women with painted fingernails and permanent waves, strictly feminine, but they do a man-sized job.” 9

Flight nurses of the 819 MAES in England who learned about air evacuation flights into France following D Day from their local military newspaper were not pleased with how they – and by implication their work – were portrayed. They bitterly resented what could be seen as a publicity stunt, given that members of the press accompanied the flight nurses of the 816 MAES into France. The flight nurses were photographed picking poppies while the planes sat on the airstrip for more than two hours as 15 casualties were “rounded up” for evacuation back to England. 10 The “photo op” tarnished the flight nurse image, chief nurse June Sanders of the 819 MAES complained. “We knew that our battle for Air Evac had slipped a trifle. – That we had left ourselves open for the ridicule of our ground force sisters – that we would henceforth be referred to in this theater as ‘The Poppy Girls.’ We have been.” 11

What kind of a girl is the flight nurse?

Does she think in terms of capillaries, capsules and traction splints? Is she a spoiled woman who, socially, speaks only to Generals, Colonels and God – in the order named?

She could be very spoiled. Quite suddenly, she has been transported into a world of men without women.

The author’s answer painted a nurse more at the middle of the spectrum:

She has been photographed and whistled at like Hedy Lamarr at a hermit’s convention.

In spite of all this she is mostly just an American girl. A pretty good Josie with a fine sense of humor and plenty of guts. She is far less vain than most females … military or otherwise. 12