Lauretta Schimmoler, a pilot who in the 1930s founded the flight nurse organization Aerial Nurse Corps of America (ANCOA) independent of the other service organizations such as the United States Army and the American Red Cross (ARC), nevertheless intended that ANCOA would become the air unit of the ARC, which in turn provided nurses for the military.

Although a civilian organization, the ANCOA was organized according to military command structure, with national headquarters in Burbank, California. ANCOA was divided into three wings based at Burbank Union Air Terminal, Newark, New Jersey Airport, and Cleveland, Ohio Municipal Airport that were subdivided into nine divisions throughout the United States in Burbank, San Antonio, Omaha, Chicago, Cleveland, Atlanta, Baltimore, Newark, and Boston. Each division corresponded to corps area boundaries found in the United States Army. The divisions were further subdivided into companies. The military analogy went even further. Members of ANCOA were assigned rank commensurate with their position. The national commander held the rank of colonel, a lieutenant colonel commanded a wing, a major commanded a division, and a captain commanded a company. 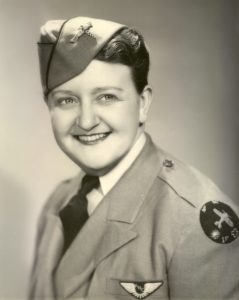 Most of the nurses held the rank of first or second lieutenant, or cadet, which was the lowest grade for a registered nurse. 1 As organizational literature stressed, however, “These titles are used only within the organization, set up for greater discipline for members working together as a women’s organization. They are purely honorary.” 2 Should a member put too much stock in her quasi-military status, she need only remember the organization’s Ten Commandments to restore her sense of perspective. An ANCOA nurse, she learned,

Like their military counterparts, those ANCOA nurses who met the qualifications took an oath of office “to support and defend the Constitution of the United States of America and the Aerial Nurse Corps of America against all their enemies whomsoever” and “to bear true faith and allegiance to the same”. 4 The oath-taking took on the fervor of a religious ceremony. In the presence of the American flag and at least two ANCOA members, the recruit took a ten-question pledge to which she responded “I am” or “I do.”

Upon your HONOR in the presence of these Witnesses you have promised to be faithful and uphold the principles and Regulations of the Aerial Nurse Corps of America.

The recruit then repeated the oath of office, the words of which differed slightly in various ANCOA documents:

“I, [recruit repeats name] do solemnly swear that I will bear true faith and allegiance to the United States of America and to the Aerial Nurse Corps of America and do hereby acknowledge to have voluntarily accepted enlistment for three years in the Aerial Nurse Corps of America, unless sooner discharged by proper authorities; and that I will serve them honestly and faithfully against all their enemies whomsoever and that I will obey the orders of the officers appointed over me, according to regulations, So Help me God!” 5

An ANCOA nurse was required to be a single female American citizen between the ages of twenty-one and thirty-five with a height between five feet two inches and five feet eight inches inclusive and a weight corresponding to her age and height. She had to pass a physical examination to determine her fitness for air duty. The applicant was also required to be a member of her state nurses’ association and a member of the First Reserve of the American Red Cross, which provided the pool of applicants from which military nurses were drawn.

Nurses joining ANCOA served on “active duty” during which time they agreed to perform nursing duties in any airworthy aircraft. They also were required to attend two-hour classes and lectures one night each week divided into medical subjects the first year, aeronautical subjects the second year, and theoretical subjects the third year. Training Bulletin Number 2 and other ANCOA literature provided a course schedule covering 150 weeks of work that in addition to the above general subjects also covered chemical warfare, first aid, drill, and the ANCOA Regulations Manual in year one; ambulance technique and regulations and radio-telephone communications in year two; and surveys of airports and aircraft, establishment of aviation medical centers, and company management in year three. All members had to pass an examination of the ANCOA Regulations Manual with a score of at least 80 within the first six months of membership and had to hold a third-grade radio-telephone operator’s license. 6 After six months, having made the necessary passing score on the Regulations Manual examination, the new nurses were placed on the active duty roster and were promoted from cadet to second lieutenant. With the promotion in rank, these nurses were authorized to wear the blue-grey ANCOA uniform with its overseas cap and military-like insignia. 7 In 1938 Joseph Panitz and Company of Los Angeles manufactured and furnished the ANCOA uniforms; Hollywood Uniform Company of Los Angeles provided the official uniform for Aerial Nurse Corps and Aviation Emergency Corps members around 1941. 8

Unlike military nursing, work as an ANCOA nurse was not full time but rather was limited to part-time volunteer participation in evening classes and weekend activities that included providing first aid for national air races and smaller air events. Occasionally ANCOA nurses would accompany a patient on a flight to provide nursing care en route. Members held other jobs as nurses and paid for the privilege of being part of ANCOA with a five-dollar enrollment fee and monthly dues of fifty cents. 9

Schimmoler’s optimistic goal of ten thousand ANCOA nurses trained and ready, reported in a 1941 issue of Trained Nurse and Hospital Review, was unrealistic given the projected need of ten thousand nurses for the Army Nurse Corps alone as the United States headed into war. 10 Equally unrealistic was Schimmoler’s undated prediction that within ten years there would be an adequate supply of ANCOA nurses for aviation duty. 11 Nor were companies of aerial nurses established in every large city in the United States as Shimmoler had hoped. 12 Yet in its early days ANCOA showed a modest growth as companies were formed – twelve of them by 1940 – and others planned in several large cities: Bakersfield, Los Angeles, San Diego, and San Francisco, California; Denver, Colorado; Fort Lauderdale and Sarasota, Florida; Chicago and Decatur, Illinois; Louisville, Kentucky; Detroit, Michigan; Omaha, Nebraska; New York City; Cincinnati, Cleveland, Columbus, and Dayton, Ohio; Portland, Oregon; Johnstown, Pennsylvania; Memphis, Tennessee; El Paso, Texas; Seattle, Washington; and Milwaukee, Wisconsin. 13 By April 1941 ANCOA had chapters in twenty-two cities in eleven states. 14 Writing to medical historian Hubert A Coleman in 1945, Schimmoler cited the formation of fourteen companies over a four-year period and a roster “to date” numbering between six and seven hundred ANCOA members, approximately seventy-five of them non-nurses. 15

Seemingly unlimited in ways to expand ANCOA activities, Schimmoler reached out in 1940 to women who for whatever reason could not qualify for ANCOA membership in its current departments. National headquarters daily received “many letters from young and old alike requesting information and an opportunity to be of service to the Aerial Nurse Corps and aviation”. 16 The answer, Schimmoler decided, was to create a Junior Section and a Second Reserve. An Auxiliary also was planned that would establish Hangar Departments in each city where an ANCOA company existed. As stated in a press release,

The purpose of the Hangar Departments is to provide the Aerial Nurse Corps of America with the necessary equipment and supplies to be used in airplanes and on airports in any emergency. Research in this field indicates that certain ground supplies cannot be used to good advantage in airplanes because of dimensions and weights. 17

In her eagerness not to turn away applicants, however, Schimmoler may have weakened her original intent to “develop a technically trained Corps of RESERVE NURSES … qualified for all forms of air duty”, particularly for military purposes. 18