Work experiences prior to military service varied, with hospital, clinic, private duty, and industrial nursing all represented. Dorothy White – eventually a flight nurse with the 807 Medical Air Evacuation Squadron (MAES) in the Mediterranean – considered this last type of job ideal preparation for flight nursing, because it involved emergency cases and responses when a physician was not in attendance and supplies were limited. About half of the nurses whom I interviewed already knew they wanted to be flight nurses when they entered the military; the others learned about this new field of nursing when at their first duty assignments.

The opportunity to enter the military and serve as a flight nurse was linked closely with patriotism.

“It was very easy to do,” said Louise Anthony, who had worked as a private duty nurse prior to joining the military. “There was no decision to be made. It had already been made. War had been declared. I had two brothers that would be in service. I had lots of cousins and nephews, my half-brother’s children. There was just no question. I was single. I couldn’t have stayed out had I wanted to.” Anthony later served as a flight nurse with the 816 MAES in England.

When the Japanese bombed Pearl Harbor in December 1941, civilian nurse Elizabeth Pukas still had six months left on her contract with the Army Corps of Engineers in Antigua, where they were building the airfield that became Coolidge Field. As soon as she returned to her former job in New York City, Pukas was recruited by the Red Cross for military service and agreed to join with the stipulation that she be assigned as a flight nurse. But the military was too slow in granting her request, the impatient Pukas thought. “There is a big, big war going on, and it’s going on in the Pacific,” she told her chief nurse. When Pukas entered the army, she had been given a choice of where she would want to go if sent overseas. She answered, “Definitely not Europe, but the Pacific.” Pukas eventually got her wish. She graduated from the flight nurse course on 2 July 1943, was selected as chief nurse of the 812 MAES, and traveled with her squadron to Hickam Field, Hawaii just before Christmas in December 1943.

Helena Ilic and Brooxie Mowery initially had dreams of work as a flight attendant with the airlines when a prerequisite for the work was a nursing diploma. But when America entered the war, and nurses were in such demand both in civilian life and in the military, the airlines stopped hiring nurses and changed their policy to require some college education instead. Ilic already was in the army when she saw a notice on a bulletin board concerning the need for flight nurses. “And, of course, I was all gung-ho, because, you see, before the war, that’s what I wanted to do,” she said. “The reason I went into nursing was I wanted to be a stewardess for Pan American. That’s the reason I went into nursing – to fly. And so the war broke out, of course – here I had a chance. I signed up immediately, and I went to Bowman Field, Kentucky.” Ilic later served with the 801 MAES in the Pacific. 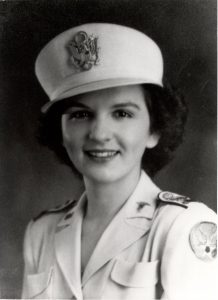 Mowery had been working in a psychiatric hospital when she decided she’d rather have a job for which she could travel. “So I tried to apply to the airlines, and I’d had two interviews with TWA in Chicago,” she said. “And they said that everything was fine so far, and that I should then await word about going to Kansas City for the final interview where they had their school. And, of course, in those days they only used registered nurses on the airlines.” She continued:

And while I’m waiting for this final interview, December seventh came along. And so I kept waiting and got through the holidays. And in January in the Midwest, you always get the doldrums because of the weather. So I got to thinking about it, and I remembered the letter I’d had from the airlines saying, “We’re awfully sorry. We have to change our program, because the armed forces need registered nurses now.” They wished me all kinds of luck. So I got to thinking, The armed forces need me? Okay. So I went down and started application and so forth.

She hadn’t heard about the possibility of being a flight nurse, Mowery said – “I was just being patriotic.”

World War II was not a passive event for the army nurses who served as flight nurses. The attack on Pearl Harbor and the fear that the United States would be invaded gave Lee Holtz of the 801 MAES in the Pacific and other flight nurses like her their gung-ho attitude about going to war. “That bomb at Pearl Harbor really stimulated everybody,” Clara Morrey of the 802 MAES in North Africa said. “There was patriotism all over the place. No matter what you had to do, you were going to go. … We had an advantage there, because we all said we didn’t care if we got killed, we were going. All those who did volunteer felt that way, and the others stayed at home.”