Helena Tynan née ILIC (Lenox Hill School of Nursing, New York City, 1942) chose nursing because she wanted to be a flight attendant for Pan American Airlines. But while she was still in nurses training, war was declared. Because the airlines ceased hiring nurses, after earning her nursing diploma in 1942 Ilic entered the Army through the Red Cross Reserve in March 1943. She was assigned initially to the Don Ce-Sar, a St. Petersburg, Florida hotel that recently had been converted into a military hospital. Duty at MacDill Field in Tampa, Florida followed. Two months later Helena saw a notice on the bulletin board about flight nursing, signed up immediately, and about four or five months later went to Bowman Field. Now she could fly as a military nurse instead of a civilian one. She graduated from the flight nurse course on 26 November 1943. Helena joined Lucy Wilson, Lee Holtz, and Adele Edmunds in the 801 MAES, initially assigned in Hawaii and flying air evacuation missions in the Pacific. 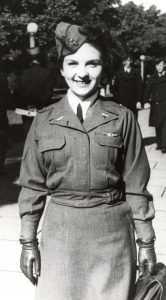 Warm, friendly, and personable, Helena had so much to share about her flight nurse experiences that she sort of flitted from topic to topic. Thinking I might have provided too much guidance in my previous interview and thus stifled what Clara Murphy might have said otherwise, I let Helena take the lead in this interview and offered only minimal guidance when she needed reassurance that she was remembering useful information. Helena’s experiences revealed a resourceful, compassionate nurse who always made sure her patients were well taken care of and well fed on her air evac missions. She was “true blue”, she said, always scrounging for whatever would make her patients more comfortable. Helena died in 2010 at age 89.

To listen to my interview with Helena Tynan, click on the link: