Flight nurses in the Pacific, like their colleagues on the European front, had very little to work with as far as supplies and equipment. Lee Holtz of the 801 Medical Air Evacuation Squadron [MAES] recalled that her squadron had “no equipment, really,” and what they did have was of poor quality. “We had bandages and morphine in the pocket, and I told you [about] the pistol under the arm. We had plasma that we could give IV, which we did have a lot of.” When one of Holtz’s patients started bleeding under a makeshift cast and she had no cast cutters, she had to cut it off with bandage scissors. “It was terrible,” she remembered. “I had the navigator come back and try to help me, because, you know, it really got very hard to cut this hard cast off, and yet I could see the red creeping through the cast, and I knew I had to get to it to put pressure on it.”

The flight nurses interviewed displayed an uncanny ability to make do admirably with what was on hand or could be scrounged to augment deficient supplies for patient care. The 807 MAES nurses in the Mediterranean considered the bulky 95-pound ambulance chest filled with medical supplies that they took on board aircraft unsuitable for their work. Fewer supplies in a smaller medical kit worked just as well and opened up needed space to evacuate another patient from the front lines. Dorothy White, assigned to the 807 MAES, became very adept at procuring supplies for her medical kit from offices and dispensaries she visited. “I used to walk through an office,” she said. “They used to be afraid to see me coming, because they didn’t know what I was going to leave with.” Covers for field telephones that she appropriated on one scouting mission made the perfect medical kit when laced together with shoestrings. The bags quickly caught on with the other flight nurses in her squadron, until “all the field telephones in the area were naked,” having been put to medical use.

Wherever she landed in the Pacific, Helena Ilic of the 801 MAES got to know the cooks and made little deals for food that she fed her patients in flight, so that “my men were always well fed.” She “scrounged around,” Ilic explained. “I was a true-blue. I did what they told us to do – improvise.” The Red Cross had only donuts and fruit juice, Ilic recalled, but the Salvation Army had “real food! Like cans of stuff. And they would make me sandwiches.” As soon as the plane on which she was flying to pick up patients landed, Ilic would find the Salvation Army and head immediately for the kitchens, making little deals for food for her patients “all over the place. … I always knew the cooks.” She even heated up soup on the planes. “And my men were always well fed, and they always had food. We never landed any place that they were hungry.” 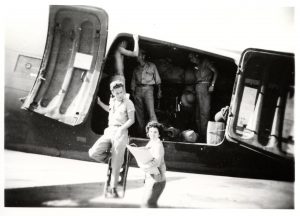 Nothing was insurmountable to these women who had been taught to improvise in their basic nurses training. Nurses training taught White to be frugal: “Well, you never throw things away – you find another use for it, see.” Resourcefulness was the most valuable lesson Ilic learned in her nurses training. As she stated, “Ideal situations don’t exist in wartime. …You don’t have all the equipment. … And you work with what you have.” She fell back on her own ingenuity, making do with what she had and improvising for what she did not have. Brooxie Mowery, a flight nurse with the 816 MAES in Europe, summed up the situation: “So there was a lot of theory, but I think it’s true of everything in nursing – theory is fine, but then you have to improvise.”