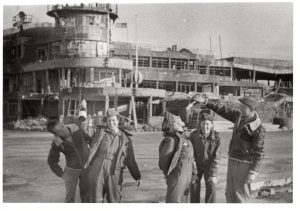 Clara Morrey, who flew with the 802 MAES in the Mediterranean, celebrated VE Day with her squadron in Siena, a small walled city on top of a hill in Italy.

We had a humongous celebration. All of the Allied people who were there celebrated down in the stadium. We had races, and it was just a day of celebration. The natives joined in. There were dancing in the streets and parades and everything. It was beautiful.

After VE Day, some medical air evacuation squadrons (MAES) in Europe, such as the 815 and 816 MAES, were slated for transfer to Marseilles for shipment to the Pacific. Then VJ Day ended the war. “At that point, I wanted to go home,” Brooxie Mowery of the 816 MAES said.

The war was over – I wanted to go home. But, you know, what chance do you have? And then we were told they were going to fly us over to Japan. Then, no, we were going to go by boat – or ship, I should say. … And we kept waiting, and finally they said, “You’re going home.” So we sailed from Marseille.

The war on the Pacific front continued through the summer of 1945. Even the Allied firebombing of Japanese cities did not weaken Japanese resolve to continue fighting. Not until 6 August when the Enola Gay dropped an atomic bomb on Hiroshima, followed three days later by a second bomb, dropped on Nagasaki, did Japan surrender to Allied forces, leading to the formal Japanese ceremony of surrender aboard the USS Missouri in Tokyo Bay on 2 September 1945.

Three of the flight nurses assigned in the Pacific recalled their reactions to the news that their country had dropped the atomic bombs. For Jo Nabors with the 812 MAES, learning that the bomb had been dropped was the worst, most frightening, most difficult event of the war. How could this ever happen? How could they produce a bomb that would annihilate this many people? she thought. She had seen a lot of the war and treated a lot of its casualties and almost crash-landed once on approach to an island without being frightened. “But I was frightened that day,” she said. Her usual calm demeanor must have shown fear during her air evacuation flight that day, for some of her patients asked, “Lieutenant, what’s the matter?” It was the first time that Nabors had shown her feelings in flight. “Well, you should be happy. The war is over,” one of her patients said. “Well, I am happy for that,” she replied, “because that means that many less boys are wounded. Our boys can go back home, and it will all be over.” But what if the bomb had been dropped on a large American city, she said. “How would you feel if it was your family?” Nabors’ heart ached for these victims whom she did not even know.

Hilda Halverson of the 826 (later 830) MAES was shocked when she heard about the bomb: “Well, I thought of all the burns. It was a terrible thing to [do to] the civilians.” Chief nurse Elizabeth Pukas of the 812 MAES recalled the time when her squadron was stationed on Saipan toward the end of the war; troops from the neighboring island of Tinian, “who were in charge of the atomic bomb,” were coming to Saipan and socializing with the army nurses in the hospital and with the flight nurses. Her squadron did not know, “even at the time that it happened – communication did not come to us, our need to know was not determined by us – that the atomic bomb was dropped and that we knew the members of the armed forces whose job it was to do it. We did not know this for a long, long time.” Pukas recalled that the socializing served dual purposes, because her flight nurses “were also the eyes and the ears of the psychiatrists. We were to pick up the cues – this young man, he’s precious, but he’s under stress. So that, again, was something for which we were very well prepared, … to report signs … to identify the cues and to report them. Many a man owes it to the flight nurse to have been that astute.”

“After I learned that I was there at that particular time, and we were hearing all of these horrible stories, how terrible a thing it was to drop the atomic bomb, I had my guilt feelings,” Pukas admitted. “And there are times when much, much later, guilt feelings surfaced, and these again, just as the members of the armed forces from Vietnam, many, many years later break down because of the memory.” Pukas sought help, and ultimately drew on her patriotic feelings to justify the act. “This was a mission, it was a decision of my government, of my country. I love it. It was the right thing to do.”