My interview with Frances Crabtree was one of those unexpected surprises. When I arrived in Spokane, Washington to interview Hilda Chamberlain in her home, Hilda mentioned that her friend Frances, another World War II flight nurse living in Spokane, wanted to be interviewed for my study. Hilda was eager that I meet Frances and arranged for me to drive to Frances’s house some minutes away after our interview.

When I arrived at Frances’s house, I was met by Frances and her husband Roe and escorted into their house. The house was a surprise itself. It is an old home with an accumulation of old furniture, cut glass, even large dolls occupying some of the chairs in the living room and dining room. My eyes were attracted immediately to an antique pump organ and a baby grand piano in the living room. This was not, however, an occasion to play. Frances served coffee and chatted a great deal about her experiences. I eventually asked her directly whether she would like to be interviewed as part of my study, and she quickly and enthusiastically agreed.

I realized when I learned her maiden name that I had read an article about Frances in an Air Force magazine published during World War II. This made my interview with her even more exciting, since in my eyes she was a bit of a celebrity, having had her picture on the cover of the magazine as well as having been the subject of an article about flight nursing. According to Frances, however, her real claim to celebrity is that she was the first nurse to go into France after D-day (though Grace Dunnam of the 806 MAES had claimed the same distinction).

Actual flight nursing was not difficult, Frances said, but she remembered that as far as patient care, the flight nurses had little in the way of supplies and equipment with which to work. Frances once had a seriously injured patient, perhaps with a skull fracture, she said, whose only chance for survival was air evacuation to another hospital. She had no oxygen or IVs to give him and could only watch him. Realizing that oxygen could make the difference between life and death, she had the pilot divert the plane to an airfield where an ambulance was waiting with oxygen.

Frances recalled that during the war she encountered a comradeship not only with flight nurses in her squadron, but with other flight nurses and aircrews—all who had been through the war together—that could not have happened otherwise. She had high respect for the aircrews “that we flew with who brought us down safe and sound with our patients”—even occasionally on just one wheel.

Frances could have talked for hours, though she was a bit dependent on my questions to guide her in what experiences to share, but we eventually brought the interview to a close. Afterward, Frances said that she and her husband wanted to take me to dinner. I was pleased to be asked and enjoyed a casual meal at a Texas barbecue place. We chatted easily through dinner, and I was invited to return to their home to see their summer cabin on a lake in Idaho and to play the antique pump organ. They are a delightful couple, and it truly was a pleasant way to end the interviews for my dissertation.

One of Frances’s stories: Frances had flown with a load of patients from Scotland to New York. When she arrived at the hotel, staff of the Air Force magazine were on the lookout for someone to photograph for an article about flight nurses. A woman approached and asked Frances, “Are you a WAC?” Frances said, “Oh, no.” ‘What are you?” “I’m a flight nurse.” “Oh,” said the woman, “Just sit right there. Don’t leave.” And Frances said, “Don’t worry, lady. I can’t even get out of this chair.” She was waiting for some place to rest her head after flying all the way across from England. The memory made Frances laugh. The magazine staff waited until the next morning to do the photo shoot for “Flight Nurse” by Charlotte Knight, Air Force 27 (10) (October 1944): 28–30, 62. 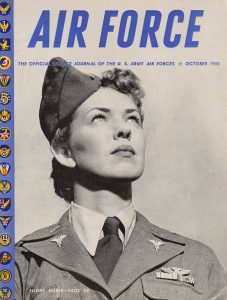