When Ethel Cerasale née CARLSON (Englewood Hospital School of Nursing, Chicago, 1942) saw the Army nurse who came to her nursing school to recruit nurses for the military, the “gorgeous … absolutely the most beautiful” uniform made an immediate impression on her. Carlson already knew she wanted to be a flight nurse, and she heard that if she applied for military service through the Red Cross Reserve, they would help her find the type of duty she wanted. She graduated from nursing school in 1942, gave the Red Cross her application in February 1943, joined the Army, and two months later was sent to Jefferson Barracks, an Army post near St. Louis. She was selected for flight nurse training at Bowman Field, KY and graduated from the course on 21 January 1944 with assignment to the 815 MAES and initial duty in England. Because of illness, Carlson was sent back to the US before the end of the war, but not before celebrating with members of her squadron in France on the day that Paris was liberated. 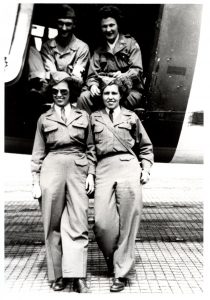 What struck me on meeting Ethel was her infectious smile, which I had remembered from photos taken in World War II. Ethel was easy to interview. She was very spontaneous with a bubbly personality, and, as in my interview with Jo Nabors, we could have talked for hours. But we talked only for about two hours on tape. Our break for dinner was a long one, but fortunately Ethel shared my enthusiasm for finishing the interview that night. While Ethel had a lot of information to share, she actually had little to say about her actual flying experiences. She was, she recalled, too busy having fun and getting into trouble, and she didn’t do a lot of flying. Her tour of duty overseas was cut short because of a medical condition that required her own evacuation as a patient back to the US before the end of the war. Ethel died in 1998 at age 77.

To listen to my interview with Ethel Cerasale, click on the link: