The Eleventh in a series of Blogs about the 31 Medical Air Evacuation
Transport Squadrons activated during WW2
to provide inflight nursing care to sick and wounded soldiers,
tended by Army flight nurses and enlisted technicians.
The focus is on the flight nurses.

The 802 MAETS in North Africa

The 802 MAETS traveled to North Africa to support the Allies fighting the Italians and the Germans to prevent Axis domination of the Mediterranean. The Operation Torch landings in French North Africa in November 1942 marked the first planned offensive of World War II for American troops, and military planners anticipated that casualties would need evacuation by air in that vast country marked by mountains and desert. 1 Although air evacuation of patients was already under way with enlisted medics serving as attendants on the planes, flight nurses brought better training and sound, often life-saving medical decisions, as well as a psychological boost to patients. 2

Simultaneous amphibious Allied landings on 8 November 1942 in Morocco and Algeria had targeted the key ports of Casablanca, Oran, and Algiers. Allied troops then pressed their way into Tunisia, through the Kasserine Pass, on their way to Tunis and Bizerte. In the series of offensives and counter-offensives of the Tunisian campaign over the next several months, the Allies eventually prevailed, leading to complete surrender of Axis forces in North Africa in May 1943 and setting the stage for the Italian campaign and the invasion of Sicily, which began in July of that year.

Although the second to depart Bowman Field, the 802 MAETS was the first squadron to arrive at its overseas location when the USS Lyons on which it was sailing docked in Oran, Algeria in North Africa on 21 February 1943 after several weeks en route for additional training at Morrison Field, FL and staging at Camp Kilmer, NJ. After the squadron members had scrambled down their ship’s debarkation ladder and stepped onto land, they were taken by truck to a bivouac area known as Mud Hill, where they “roughed it” for about 2 weeks while awaiting accommodations at Maison Blanche, their first duty station. The squadron historian captures the humor of the situation: As the flight nurses dozed in their tent that night, warm and dry in their sleeping bags, “they listened to what was then identified as rifle shots in the distance, but which proved less dramatically in the morning, to be the crack of dropping latrine seats … Their life is really rugged, cold showers, chow line and no tables and long hikes.” 3

Flight nurse Clara Morrey Murphy remembered their arrival by plane at Maison Blanche airfield in March 1943. The flight nurses had considered themselves “going forward” so had donned all of the fleece-lined clothes that had been issued to them. “What a spectacle we were – deplaning with all our gear – helmets, gas masks, musette bags, etc. I understand it was a sight enjoyed by all of Base Operations.” 4 She continued:

They had a big laugh. And ’course when they heard we were coming, they were so happy that we were coming, they treated us just royally. They had cleaned out the cement French barracks. It was really very rustic. But they had it cleaned out and ready for us. And right about 10 paces out the back door, they had built us a beautiful private air raid shelter. So we all got down in there and looked around, and that air raid shelter collapsed before we had our first air raid. 5 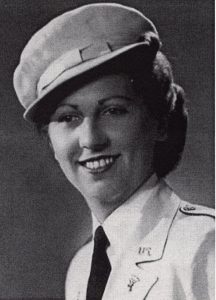 Work was heavy for the 802 MAETS, and flight nurses made up to 3 trips a day with patients on the shorter flights lasting about 30 minutes. The flight nurses and enlisted technicians typically started their flying days at 4 o’clock in the morning, and after eating breakfast they assembled at the airfield to wait until they were matched up by name to board planes already loaded with cargo. They did not fly at night, so air evacuation crews often remained overnight away from their home base during longer missions. 6 The 802 MAETS operated on its own through May 1944 when it was joined by the 807 MAETS for the evacuation of casualties from the Italian Front. 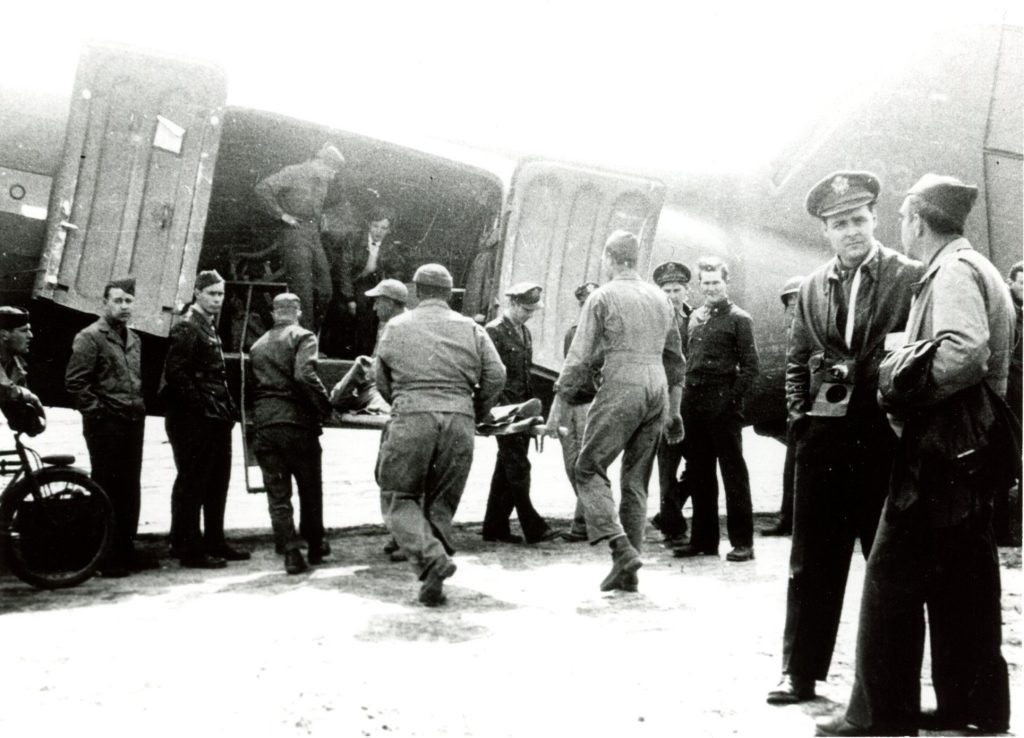 In July 1943 the 802 MAETS moved to Foch Field, Tunis; like the 801 MAETS, theirs was a squadron on the move. Flight nurse Dorothy Lonergan Jouvenat tells the story of returning to Maison Blanche after a short flight and finding that her entire squadron had relocated to Tunis to cover the Sicilian Campaign while she was gone. Not sure what would happen next, she sat down and began to read a book. A pilot from headquarters stopped and asked if she would like a ride to her new home and flew her to her new duty station. 7

“We stayed in Tunis two months,” 802 MAETS chief nurse and historical officer Catherine Grogan recalled. “From there we went to Licata, Sicily to spend September which had thirty days too many. Licata was the dirtiest place we ever hoped to see. The only nice memory is that from there we started evacuation from Italy. With each new move, morale ran high and energy was renewed. That was definitely needed in Licata.” 8 Palermo, Sicily followed, where the 807 MAETS joined them to cover the Italian Campaign. Their next move 3 months later in May 1944 was to Frattamaggiore near Naples, and 2 months afterward in July to Lido di Roma, a resort village built by Mussolini near Rome. 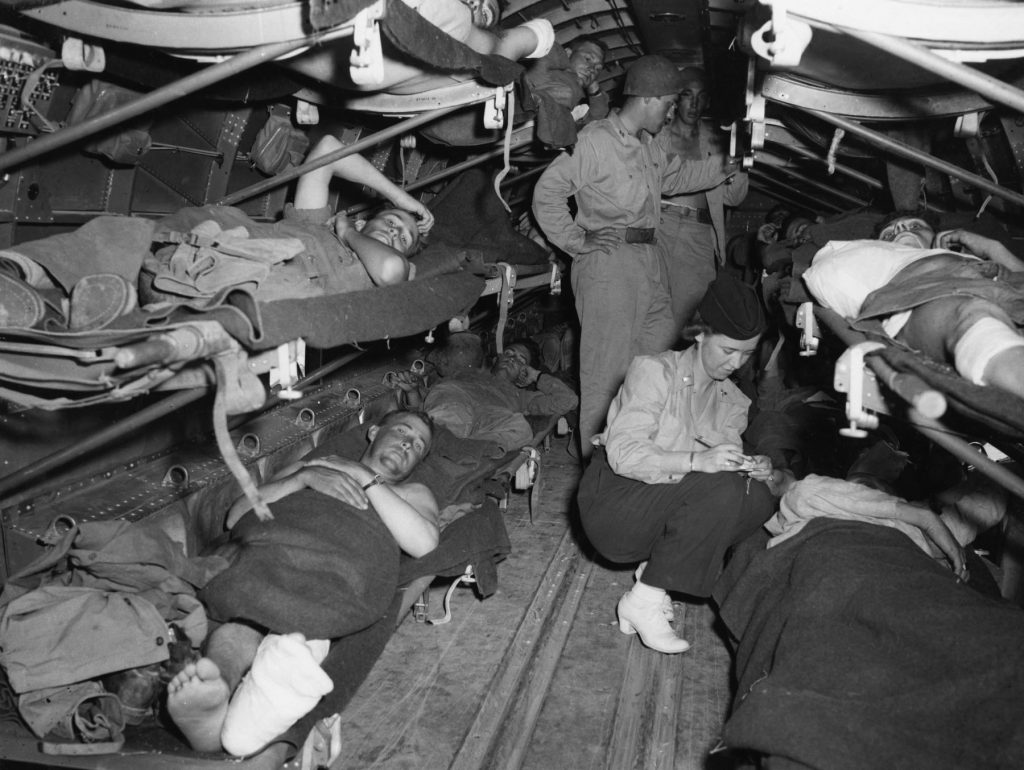 In August 1944 about half of the 802 MAES flight nurses went on 2-week Detached Service to Istres, France near Marseilles where they evacuated patients within France and from France to Italy. 9 Here in November flight nurse Aleda Lutz lost her life when the aircraft in which she and 15 patients en route to Istres from Luxieul encountered a severe storm and crashed near Lyon, France. All aboard were killed. 10 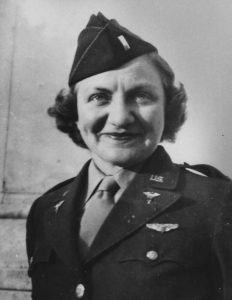 The 802 MAES moved to Sienna in July 1945, where they celebrated V–I Day and V–J Day and from where squadron members started returning to the US. The original flight nurses of the 802 MAES had understood that they would rotate back to the US after a year overseas, when they would attend the flight nurse course and officially earn the wings they already were wearing. This did not happen. Not until May 1945 after V–E Day did orders send them to the States with the option to attend the course, then at Randolph Field, TX in order to continue wearing their wings. 11

The victory in Europe resulted in a reshuffling of the 802 MAES and the 807 MAES. “By June the squadron was scarcely recognizable”, 802 MAES chief nurse Grogan reported, for the 802 MAES and 807 MAES had “practically traded personnel”. 12 Flight nurses with enough points determined by months in service, months overseas, and combat decorations were sent home for 30 days rest and recuperation followed by discharge from the military or reassignment. Those 802 MAES flight nurses lacking adequate points who remained in Italy were attached to the 807 MAES and were preparing for a voyage to Manila when word of an imminent Japanese surrender cancelled their orders for the Pacific. 13

An audio recording of my interview with Clara Murphy is available at: