As early as 1930, before flight nursing in the United States military was a reality, Lauretta M. Schimmoler, a pilot, had foreseen a need for flight nurses. Born in Fort Jennings, Ohio in 1900, Schimmoler, who graduated with honors from the Bliss Business College of Columbus, tried her hand at various business pursuits – working as a court stenographer, studying law, raising chickens – before settling on the business of aviation. By the age of thirty she had learned to fly, obtained her pilot’s license, and established and managed the Port Bucyrus Municipal Airport in Ohio. As the first female pilot in Crawford County, Ohio, Schimmoler was a “favorite daughter” of the local press. “From Chickens to Flying: Lauretta Schimmoler Quit Poultry Raising to Pilot Planes” began one account typical in its admiration for her achievements. After chronicling Schimmoler’s career, the reporter concluded:

It is not hard to understand why Miss Schimmoler has risen so rapidly in the flying world. Her extraordinary capacity for activity, her quick movement, her orderly mind and her keen sense of values are outstanding. She never is too busy to help a student flyer. She isn’t afraid to climb into overalls and to find out what causes an unnatural knock in an engine. She keeps her head when at the controls and so far has not had a crack-up. 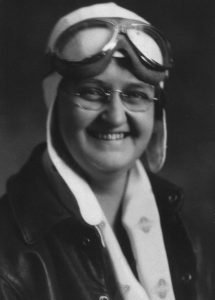 In 1932 in recognition of her aviation activities, Schimmoler was inducted into the Ninety-Nines, the national organization of licensed women pilots. 2 But she had even loftier ambitions. While continuing to participate in air meets and aerial exhibitions as part of this prestigious group of flyers, Schimmoler was contemplating the use of aircraft for a more compassionate purpose that would involve flying nurses.

The idea of nurses in airplanes was not entirely new. Nurses had become airborne in 1930 when a group of women selected and organized by Ellen Church, a nurse from Iowa who was working at a San Francisco hospital, formed the initial cadre of registered nurse stewardesses for Boeing Air Transport, the predecessor to United Airlines. Church had never been on a commercial plane when she stopped by the Boeing Air Transport office on Washington’s Birthday in February 1930 on her day off, ostensibly to book a flight home to Iowa. Because it was a holiday and business was slow, Mr. Stephen Stimson, the Passenger Traffic Manager for the Oakland, California to Cheyenne, Wyoming route, chatted with Church about the new passenger planes capable of transporting eighteen passengers. Church, who had learned to fly and had thirteen solo hours to her credit, wanted to combine her love of flying and her love of nursing in some way to earn a living. Like Schimmoler, Church envisioned a need for air ambulances in outlying districts far removed from hospitals. In her conversation Church let it slip that she had learned to fly, and the eager Church and the enthusiastic Stimson began to talk about possibilities. 3 As Church recalled in 1960:

He told me about the boys they had hired and that they had them spotted on different jobs and about the kind of use they were going to have for them. I said, “Why couldn’t a girl with nursing do that?” It was the psychology of a woman earning her living up in the air every day. … “[W]hat man could say he was afraid to fly if a woman was doing that?” He [Stimson] got real enthusiastic about that and then went on to other things. He said he knew the manager of the airport in Oakland and then said, “I will give you a letter of introduction or a card or something. You go and talk with him. Maybe something will work out there. Let’s pursue it further. You will hear from me.” 4

Two or three weeks later Stimson called to arrange an interview with Church and one of the company vice presidents “about this stewardess proposition if you are still interested”. The vice president was “totally unenthusiastic about the whole thing”, but Stimson, who was sold on the idea, got approval from Mr. Boeing for a three-month trial with home base at Cheyenne. Church, who had once wanted to be a copilot, had found her true calling in the airplane’s cabin, not in its cockpit. 5 The vice president who had opposed the idea of female stewardesses resigned rather than be connected with the new program. 6

Finding the first seven nurses who met the requirements for stewardess duty was not easy for Church because of height and weight requirements, although many women were interested. She eventually found three women in San Francisco and four in Chicago. Concerning their training as stewardesses, Church recalled:

We didn’t have any kind of training. There were discussions as to what was to be served and about the forms to be filled out. We had nothing to go on. We had to formulate our plans as we went along. Certainly it was the trial and error method. But as soon as we learned what we were doing, what the service involved, what there was need for – then we began training the girls by sending them out with older girls and giving some ground training beforehand. In the beginning everybody was on his own and we did the best we could. 7

Tasked with providing safety and comfort for the traveling public, these eight women – Margaret Arnott, Jessie Carter, Ellis Crawford, Harriet Fry, Alva Johnson, Inez Keller, and Cornelia Peterson, with Church as Chief Stewardess – did much to boost the image and reputation of the nascent commercial airline industry as they attended to the needs of the occasionally apprehensive but for the most part healthy passengers. 8 The earliest stewardesses were under age twenty-five, stood under five feet four inches tall, and weighed under 115 pounds. The women wore a tailored suit in soft green and grey; a grey linen smock for wear inside the plane was discarded after a few months. A cape and hat for outdoor wear completed the outfit.

In the air the stewardesses served their passengers a cold meal of fried chicken, ham, potato chips, pickles, fruit cup, fresh fruit, and cookies, with hot coffee or hot tea. Additional duties included supplying reading material, sending telegrams and dispatching letters, and furnishing pillows and blankets. 9 And as Church pointed out, “We spent much more time with passengers than they do today, pointing out things of interest as we flew over. We had maps. … But on the whole we spent more time talking and listening and trying to do little things for them.” 10

Church had been a stewardess for only eighteen months when she was grounded following an automobile accident. She returned to school to earn her nursing degree and resumed her nursing career on the ground. Meanwhile, the stewardess program “took off” with most of the airlines following Boeing’s lead. The idea of stewardesses had caught on not only with air passengers but also with America’s nurses who applied by the thousands for the chance to take their nursing into the skies.

Schimmoler, however, had a better idea.