Jenevieve (Jenny) Boyle Silk, who died in June 2017, was the last living of the 25 World War II US Army flight nurses whom I interviewed in 1986 for what became Beyond the Call of Duty: Army Flight Nursing in World War I (Kent State University Press, 2013). I clearly remember each of my interviews with these remarkable women and still can picture them and hear their voices when I think of them.

Grace Wichtendahl née DUNNAM (Levi Memorial Hospital School of Nursing, Hot Springs, Arkansas, 1939) had thought about being a Navy nurse but did not have the five years required work experience, so she joined the Army instead. An assignment to the Philippines was cancelled so that Grace could transfer to an Army Air Forces base and attend the second class of the flight nurse course from which she graduated on 26 March 1943. Grace was appointed chief nurse of the 806 MAES, the first air evac squadron to arrive in Europe in preparation for D-Day. Assigned initially in England, the flight nurses were kept busy honing their skills on the ground in what Grace remembered as “plane-loading, plane-loading, plane-loading” and “marching, marching, marching” until their cross-channel air evac missions began after D-Day. Two highlights of Grace’s wartime assignment were tea with the King and Queen of England, and her first trip to Omaha Beach. Of this trip Grace remarked that everyone has a few moments in their life when they prove themselves. This was her moment. 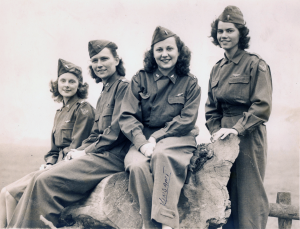 Grace Dunnam (second from left) with flight nurses of her squadron.
(USAF Photo)

Charming and gracious, Grace was the first Army flight nurse whom I interviewed. From Grace I learned that while my research questions constructed to help elicit how the flight nurses coped with war could guide the conversation, they could not dictate it. And that I would do best to let my interviewee choose what she wanted to share with me within the context of her experiences as a flight nurse in World War II. Ways of coping would become evident without having to address the topic directly. Grace did not let me tape the interview, but my written notes provided useful insight into the life of a flight nurse in Europe during the war and even captured Grace’s personality on paper, if not on tape. From her I learned about flight nursing from the perspective of a chief nurse responsible for the 24 other flight nurses in her squadron. Grace was the first of my interviewees to die, on 16 December 1990, at age 72.