I arrived at the airport servicing Poland Ohio on time, give or take a few minutes, but what an arrival. There were no jets on this day of my journey; rather, small propeller planes. That plus turbulent skies and lengthy holding patterns preceding the landing made for very unpleasant flying.

Jo, who met me at the airport, is very stylish, an avid golfer, and very friendly. She took me to my motel in Girard near the airport and suggested that, since the drive to Poland where she lived would take about 45 minutes, we do the interview at my motel. I agreed. Jo’s mothering instinct came out in her reminders to me at the motel to request a wake-up call, to confirm my transportation to the airport, and to lock my door.

Jo had brought along photos and some other mementos from her assignment as a flight nurse. At times during our interview, she would look through her pictures to remind her of experiences to share with me. She talked easily and was very articulate. Jo had married a military officer immediately after graduating from the flight nurse course, but it was she, not her husband, who received orders for overseas duty. Jo was one of the few married flight nurses, and her squadron commander “took me under his wing, because he didn’t want anything to happen to me while I was overseas.”

When we’d been talking for over an hour, I mentioned to Jo that I didn’t want to tire her out. Jo said she wasn’t tired, was enjoying herself, and wanted to keep going. We talked for about an hour and a half before Jo decided she couldn’t remember any more about her experiences as a flight nurse in World War II.

After our interview Jo and I ate dinner at a charming country inn in the area. Jo made a comment before dinner that pleased me very much. After letting me know how much she’d enjoyed our visit and the interview, she said that I’d put her immediately at ease, because I wasn’t afraid to talk about myself and to answer the questions that she asked me. That, she said, made her more comfortable to talk about her own experiences.

I think that my friendliness, my informal approach to the interview itself, and my genuine interest in what the women are saying are helping to ease any qualms the women who volunteer to talk with me might still have about their decision. But I would do better to avoid any further commuter flights lest my usual easy composure be too much disturbed to permit a successful interview.

Some of Jo’s stories: Jo’s first assignment in the army was as a hospital nurse at Keesler Air Force Base in Biloxi, Mississippi. Eager for reassignment after a year in that job, she put her name on every list that promised a transfer out. When the list for Bowman Field appeared, Jo signed up for that one, too, and was selected for the flight nurse course. Once assigned with her squadron in the Pacific, Jo was the first flight nurse in her squadron to fly into Okinawa to pick up a load of patients, on D+4. Like her colleagues, she had added her name to a list of volunteers. Hers was the name drawn out of a hat to make the mission. “And, let me tell you, when I got there, I was scared,” she said, because of the recent bombings that had devastated the area. When the soldiers saw the airplane with the Red Cross on it, they came running, crowding around Jo and asking questions. She gave them books and magazines—she had no food to give them—then loaded the patients on board for a flight to Guam. She had the most seriously wounded soldiers, “and there were a lot of them,” she remembered. The media at Guam picked up the story as soon as the plane landed and they saw a flight nurse on board. 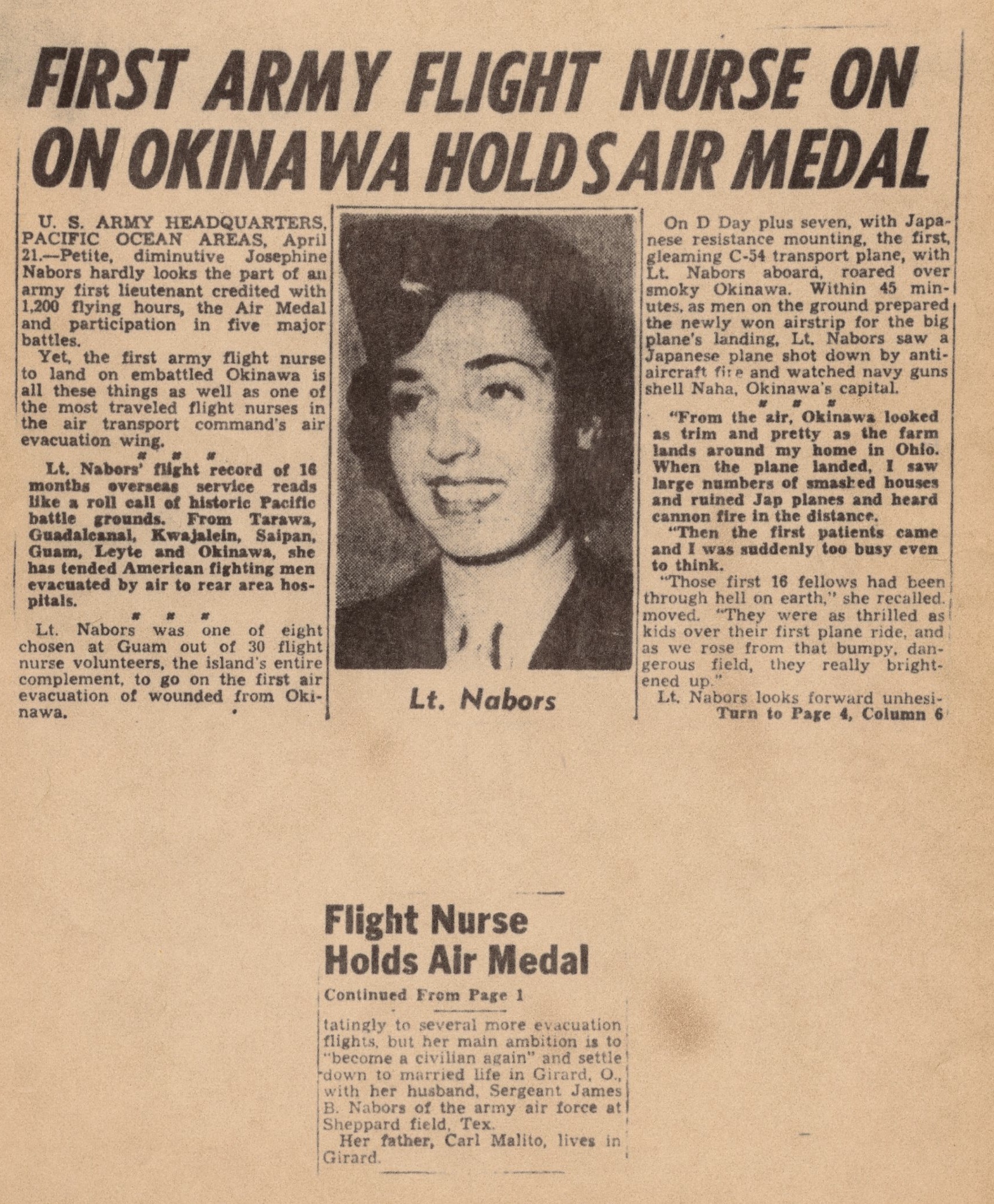