Ethel Cerasale had given me Denny’s name prior to the World War II Flight Nurses Reunion in Cocoa Beach, Florida as someone who would be willing to be interviewed for my dissertation. Denny had been assigned to the 815 MAES in England with Ethel. Despite our difference in age, Denny was like a sister. She quietly assured me shortly after we met that she would do whatever she could to help me with the dissertation; that included being interviewed.

Denny was not gregarious like many of the other World War II flight nurses at the reunion. She didn’t chatter and seldom related her own experiences. She was friendly but not very talkative; she seemed reserved. It was a quiet sort of friendship that was nonetheless evident. Perhaps it was her twinkling eyes that suggested her warmth and friendliness. Whatever the reason, Denny immediately befriended me, and I liked her from the time I first met her.

During our interview Denny had very little to say. It was more a desire to help than a vast store of memories, I think, that led to the interview. She often glossed over events, commenting that I’d heard it before from others. My questions to help her focus on her own perception of an event did not result in much additional information.

Denny’s squadron arrived in England before D-day, and she remembers watching the “miles and miles” of C-47s pulling gliders behind them when the day finally arrived. All day “they just went in twos and twos and twos, and so you just couldn’t begin to think how many were going across there. And then three days later we were going across to pick them up and bring them back.” On D+3, flight nurses of Denny’s squadron flew across the English Channel to a rough airstrip hurriedly put down in a poppy field and brought patients back to England.

From England, Denny’s squadron moved to Orly Field near Paris for a year and started evacuating patients from Paris to New York on Air Transport Command planes. She had 25 round-trips across the Atlantic and recalls that her squadron alone was moving 52,000 patients a month, for which they received the Air Medal.

As part of the interview Denny gave me a five-page typed account of her experiences as a flight nurse in World War II that she had written shortly after the war. This, she hoped, would give me the additional information and details not adequately covered in our interview. Denny had valuable information to contribute to my study, concise though she was in relating her experiences.

One of Denny’s stories: Denny recalled some close calls while flying that occurred after D-Day. She flew into France, east of Normandy with bombs going off close enough to shake the plane. On a return flight with patients on board, her plane got into a flight of bombers and had to drop under them to avoid a mishap. On yet another mission into France toward the front, Denny looked down and saw a swastika on top of a train under the plane. She laughed as she remembered, “And I thought, There’s something wrong here.” She told the pilot, who hadn’t seen it, and he turned around and flew back the other way. They didn’t know if the train was in the hands of the enemy or the Allies. 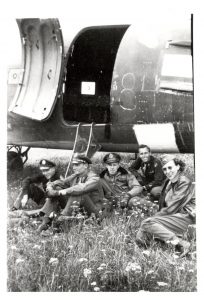