Quarters in which the flight nurses lived gave some nurses an exercise in coping. The flight nurses often were billeted together in one large room or several of the nurses shared smaller rooms. Living quarters were often old buildings in poor condition converted to house the nurses. Jocie French, who was assigned with the 811 Medical Air Evacuation Squadron (MAES) in England, recalled living in an old, abandoned, dirty mess hall with vines growing inside through the windows and mice “all over the place.” The nurses had to clean up the building when they moved in.

Furniture was usually minimal, and bathrooms often were located away from the living quarters. On one island in the Pacific, the flight nurses had to call for a guard to escort them from their quarters to the outdoor latrine. Lee Holtz, serving with the 801 MAES in the Pacific, described the situation:

And they were still finding … stray Japanese around there. So when we got to the back door of the Quonset hut to go to the bathroom at night, … you’d call, “Guard!” And he’d come and walk you to the latrine. I bet he loved his duty during the war! 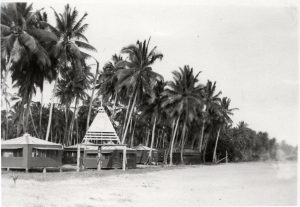 Ethel Carlson of the 815 MAES in England remembered her first quarters, Boxford House, near Welford, as far from primitive. The flight nurses expected to pitch tents and instead found themselves in a gorgeous mansion with formal gardens on an acre of land. They couldn’t believe it – a great entrance hall, spiral staircase, heads of game on the walls, a marble fireplace. “And this was our own private little barracks,” she concluded. 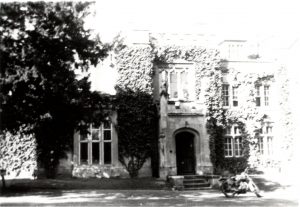 Alice Krieble, assigned with the 818 MAES in England, remembered that it was not always easy living with so many of her colleagues. She used to go out to a cemetery on the base and just sit and talk to the dead to get away from “a bunch of females.”

Jo Nabors of the 812 MAES recalled the difficulty she had showering on one of the islands in the Pacific:

We had an outdoor shower, and the shower was a large drum, and it had holes in it. … And it was the shower that everybody used. So this one time I was in there taking a shower and went to rinse the water, and I see a face up there. Well … I screamed, and of course everybody came running. It was one of the fellows who hadn’t seen a white woman for so long. So from then on we wore bathing suits in the shower.

Just how livable the quarters were often depended on the flight nurses’ assertiveness and ingenuity. Elizabeth Pukas, chief nurse of the 812 MAES, was upset to learn that the 25 flight nurses in her squadron were to be housed in two three-bedroom houses on a base in Hawaii.

I simply went to our commanding officer – flight surgeon – and said, “This is really asking a little bit much. Please get us another house so that three divided into twenty-four is a little bit more livable.” And then of course I was told, “Well, remember this is very, very temporary. All of you will be out in the Pacific.” I said, “Yes, but there will be a number of us having to stay home in between flights to recuperate, to refurbish, to repack. And this is just a little bit – a lot – of equipment, and our personal property, our clothes are still in the closet, our toiletries are still there. This is our living quarters. And I’m very sure you would not ask a male counterpart to live in such close quarters.” And we did get a little more adequate housing as time went on. … But it did take a little more than just speaking to our squadron. … I did have to go to headquarters to say, “I’m asking if the request has come in and what action is being taken.” I’m not too forward, but I am a chief nurse. … My flight nurses are extremely important to me.

The amenities of home were also important to Pukas. Having obtained the third house eventually, she decorated the houses with paintings on loan from a local art museum and stocked the kitchens with good foods obtained from the nearby navy commissary.

While flight nurses in the North Atlantic, Europe, and Alaska were contending with cold temperatures, flight nurses in the Pacific had more tangible irritations. Mosquitoes galore were dealt with by wearing protective clothing and sleeping under mosquito nets at night, but the larger insects, lizards, and snakes were not so easily endured. Said Adele Edmonds, in the Pacific with the 801 MAES, “But there were so many crawly things! Lizards and snakes. I don’t know how you can prepare yourself for something like that, because I’d always been terrified of them.” Two nurses identified the snakes as the worst thing about being a flight nurse during the war. Holtz remembered:

Oh, we were so frightened of snakes and bugs and stuff! But we lived with them. There wasn’t anything else we could do. … They were tremendous things! And of course I’m a coward about those things anyhow. Those are the things I think that were really hard to take, because we could laugh about everything else, but not that.

Helena Ilic, also in the 801 MAES, recalled that the snakes taught her something about herself: “I’ve always been deathly afraid of snakes. … I couldn’t even look at them before the war. And if I got through that, I said … psychologically I must be a pretty strong person, because if I didn’t go absolutely berserk over those snakes!”

Food was another concern. Flight nurses often had to resort to C-rations and K-rations for sustenance and to such items as found their way to overseas mess halls. Holtz described the culinary situation:

You know, we lived out in the jungle, and we had very poor food. We all complained about the food constantly, because it was mostly stuff shipped from Australia, and the meat – we called it Australian bully beef. It was really canned meat of some sort, but it really was tasteless, so we got to the point we didn’t eat it anymore. And I think once they even sent us canned liver, but I’m not sure of that. But I know most of us survived on peanut butter.

Nurses in the Pacific compensated for the poor food when they managed to get back to the United States or to one of the larger islands on a flight, where they stocked up on fresh food, milk, and pastries. Those flight nurses assigned in the Pacific looked forward to the times that they would be invited to dine with the navy officers aboard a ship. Holtz remembered:

We were invited out lots of times to dinner by the navy, and it didn’t matter who invited you, you always went, because they always had the best food. We’d go with anybody to go eat a meal with the navy. You got to that point. And they would give us things, besides. They would give us canned stuff like Vienna sausages or Spam or something to bring home with us, and that was really great!

Added Nabors, “They would give us all the fresh fruit, vegetables, and meat. … We’d say we’d sell our soul … for an invitation to get over there.”