The Twelfth in a series of Blogs about the 31 Medical Air Evacuation
Transport Squadrons activated during WW2
to provide inflight nursing care to sick and wounded soldiers,
tended by Army flight nurses and enlisted technicians.
The focus is on the flight nurses.

The 803 MAETS and the 805 MAETS stand apart from the other 4 air evacuation squadrons activated in November and December 1942 for having been sent to areas other than the Pacific Theater and the European Theater. The 803 MAETS was sent to the China–Burma–India (CBI) Theater in support of America’s defense of China, where Japan had been fighting a war of conquest since 1937, and 3 Flights of the 805 MAETS – one of them on Temporary Duty before assignment to Central Africa – were sent to the Territory of Alaska in the American Theater in support of the Battle of the Aleutian Islands.

When President Roosevelt announced that the defense of China was vital to the defense of the US, American forces were sent to the CBI. When WW2 began, Japan already had invaded China and set up a puppet government in Manchuria with the intent of using China’s natural resources to further its imperialistic agenda. The Allies joined the Chinese military in its struggle to rid its country of the Japanese; troops fought against the Japanese invasion of Burma and India as well. When the Japanese cut off the Burma Road in March 1942 in order to close the overland supply route to China, American soldiers and local laborers built the Ledo Road as an alternate route. During the interim, pilots flew supplies over the Hump, the name given to the Himalayan Mountains on China’s border with India. The Allies had a vested interest in China in particular as a base from which to launch a strategic bombing campaign against Japan. By late 1944, however, the raids were staged from the newly captured Mariana Islands; in November, B–29 bombers flying from Saipan bombed Tokyo. But fighting in the region continued throughout the war.

AAF air surgeon General Grant had urged assignment of a medical air evacuation squadron to the region as early as March 1943, but the War Department did not commit until that summer; the 803 MAETS arrived at their duty station in Chabua, India in late fall. 1 MAETS commander Morris Kaplan and chief nurse Audrey Rogers transported a load of patients to Karachi on their squadron’s first air evacuation flight in the CBI 2 days later. 2

While still at Bowman Field, the 803 MAETS was known for enjoying what they did “much more than the average”, and for approaching their work with enthusiasm. 3 Their positive approach to air evacuation had much to do with their flight surgeon commander, Morris Kaplan. The squadron’s flight nurses came from diverse nursing backgrounds:

All of the 803 MAETS nurses had completed the formal training course for flight nurses at the School of Air Evacuation at Bowman Field, KY that began in January 1943 and graduated its first class on 18 February 1943; most of the 803 MAETS nurses had graduated in the third class on 14 May 1943. By then the students had benefited from courses in Chemical Warfare, First Aid, Oxygen Therapy of patients in flight, Aero-Physiology, Nursing Care of patients in flight, Field Hygiene, and Sanitation. Their frustration with their “hurry up and wait” limbo status after graduation and their eagerness to apply their air evacuation training is captured in the 11-verse “803rd Lament” written by Lieutenants Elsie Ott (14 May graduate) and Georgia Insley (18 February graduate) “while lying on cot waiting final movement orders at Bowman Field, Kentucky, July, 1943” and sung to the tune “It Ain’t Necessarily So”:

The Squadron is ready to go
But orders are coming in slow.
We wait without ranker
To get on a Tanker
Because we are ready to go. 5

Orders could be slow in coming, as the first verse indicates, but the 803 MAETS, like the squadrons that followed, eventually did depart Bowman Field for the actual work of air evacuation overseas.

The 803 MAETS spent their first few weeks in India setting up their living space in Chabua with as many comforts of home as they could buy, build, or rig. Electricity, laundry facilities, and a shower all appeared thanks to the tireless work of men from the 803 MAETS and other friendly squadrons. Once living quarters were in satisfactory condition, the squadron turned its attention to recreational facilities. Badminton, volleyball, ping pong, and a tennis court were soon eclipsed by Kaplan’s plan to build a swimming pool in March 1944. The pool, which was completed 30 days later with the generous help of engineers with bulldozer and cement mixer, was the first of its kind in India and the pride of the 803 MAETS. 6 The squadron soon settled into its work, which was divided into “Valley Runs” to Calcutta and Karachi, as well as local flights, and “Combat Time” earned on flights into Burma. In April 1944 the squadron had 15 regularly scheduled trips each week carrying the 803 MAETS personnel all over China, Burma and India, plus any number of emergencies. 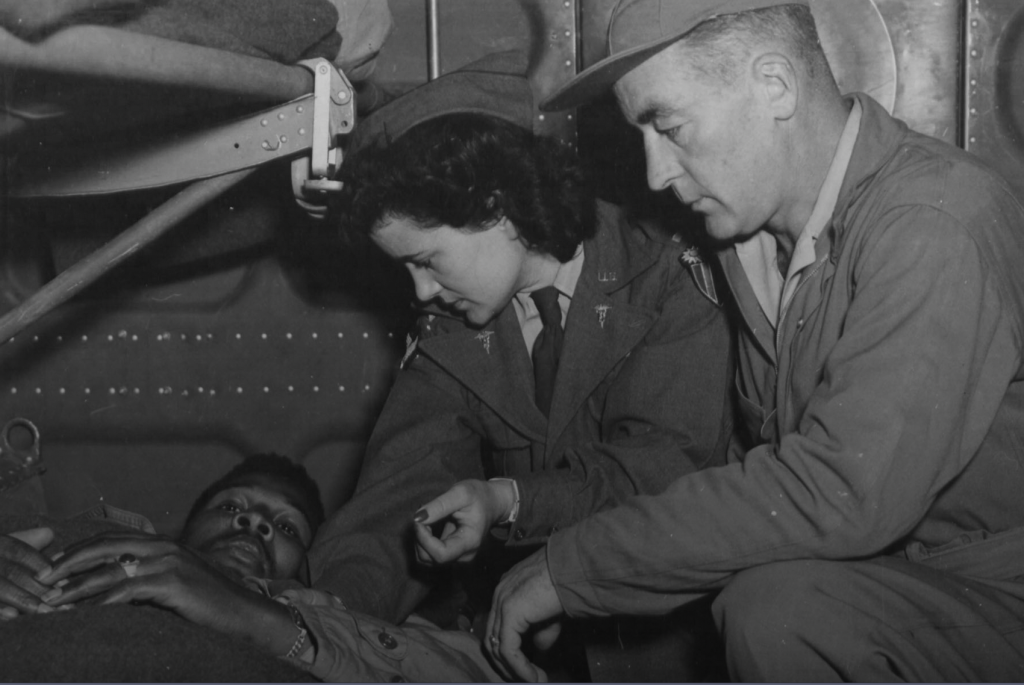 While other MAETS used available cargo aircraft for air evacuation missions, the 803 MAETS had 4 airplanes assigned for use as hospital ships – 3 C–47s and 1 C–46. 7 The medical crews transformed their planes into flying hospital wards. Comforters, blankets, sheets, and pillows assured a more comfortable ride for litter patients; seat pads softened the ride for ambulatory patients. Painted peanut and beer cans found use as ashtrays hung by wire along the window ledges. Fruit cans were turned into sputum cans in case of airsickness. Magazines, coffee, sandwiches, and fruit juices obtained from other organizations were added amenities for the patients. 8 Such “luxurious” in-flight accommodations were the exception, however, not the rule.

In December 1943, 1 Flight of 803 MAETS nurses and enlisted technicians was sent to China, Miranda “Randy” Rast, Flight leader, went to Kunming, with the other nurses, Jeanette “Tex” Gleason among them, scattered throughout China. The squadron history notes that the women made history as the first American nurses allowed in China since the war began – much against General Joseph Stilwell’s “admonition that war was no place for women”. 9 In theory, Rast’s colleagues would bring patients to Kunming, and she would fly with the patients over the Hump. In reality, however, Rast recalled, there was not much flying; the flight nurses flew “on demand” and, like other flight nurses in similar situations, helped out in dispensaries when not needed for air evacuation missions. Sometimes lack of supplies, most especially gasoline, grounded the airplanes; at other times unpredictable weather over the Hump made flying too dangerous. 10

Flight nurses Jeanette Gleason and Elsie Ott of the 803 MAETS made the history books for noteworthy occurrences in the line of duty. Gleason, who was in the Flight on Detached Service in China, was the first flight nurse to “hit the silk” and become a member of the Caterpillar Club – survivors who have parachuted from a disabled airplane – when in January 1944 she, along with the rest of the air crew, had to parachute out of their plane that was lost and out of fuel over the mountains. No patients were on board; Gleason had offloaded them at Kunming. The flight nurse remembered her training at Bowman Field, wrapped herself in her parachute after landing, slept until morning, then made her way down the mountain following a stream that led to a Chinese village where residents helped her make telephone contact with the rest of the crew. A jeep took them to Kweilin, headquarters of the AAF Flying Tigers. 11

Before graduation from the flight nurse course and assignment to the 803 MAETS, Elsie Ott, at the time an Army nurse at a hospital in Karachi, had been chosen to accompany 5 sick soldiers on a flight in January 1943 from Karachi to the US on the first transoceanic air evacuation mission. Major Richard L. Meiling, Chief of the Operations Division, Office of the Air Surgeon, summarized the significance of this historic flight that brought patients halfway around the world within a week’s time, attended by a nurse to provide their care: “The future success and development of air evacuation certainly rested in the hands of Lt. Ott during those seven days, for had she failed it would be difficult to regain the lost confidence of all concerned.” 12 But Ott did not fail, and in recognition of her accomplishment, in March 1943 she was the first woman in the history of the US Army to be awarded the Air Medal. 13 Flight nurse training and assignment to the 803 MAETS followed. 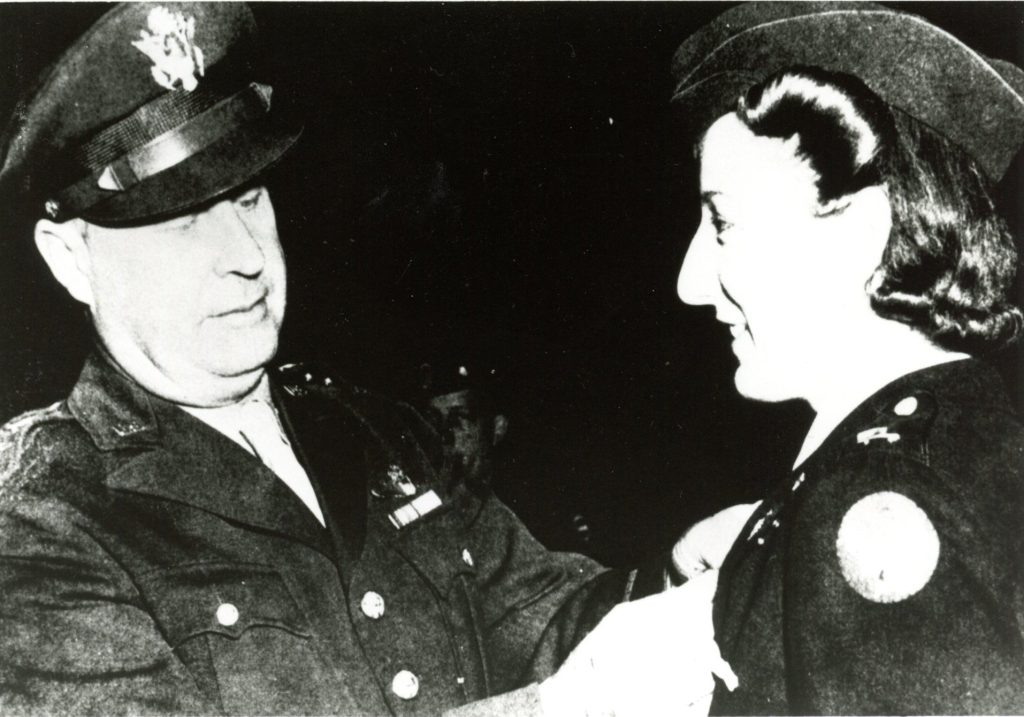 The 803 MAES Flight in China rejoined their squadron at Chabua in September 1944. By then the 821 MAES had arrived in Chabua and began alternating routes with the 803 MAES until moving to Ledo. In October the 803 MAES flight nurses began returning to the US – some because of operational fatigue manifested by weight loss, anorexia, difficulty sleeping, and nervousness; the last of the 803 MAES nurses left India for the US in December 1944; their replacements arrived in February 1945.

For more about Jeanette Gleason’s parachute jump and Ott’s historic flight see Beyond the Call of Duty: Army Flight Nursing in World War II, Chapter 2 and Chapter 10. For the entire “803rd Lament”, see the Blog for 6 August 2017 and the next Blog in this series.