The Seventh in a series of Blogs about the 31 Medical Air Evacuation
Transport Squadrons activated during WW2
to provide inflight nursing care to sick and wounded soldiers,
tended by Army flight nurses and enlisted technicians.
The focus is on the flight nurses.

A Word About Squadron Histories

Squadron histories prepared by the MAETS vary in detail; some are written in narrative, others in outline form. While some are generous in their documentation, including the names of flight nurses assigned to the MAETS and details of their activities, others include only the bare minimum of information that was required. Much depended on the person to whom the additional duty of historical officer was assigned and his or her primary workload. The work of squadron historian was not a full–time position but rather an additional duty assigned to an officer of the MAETS. 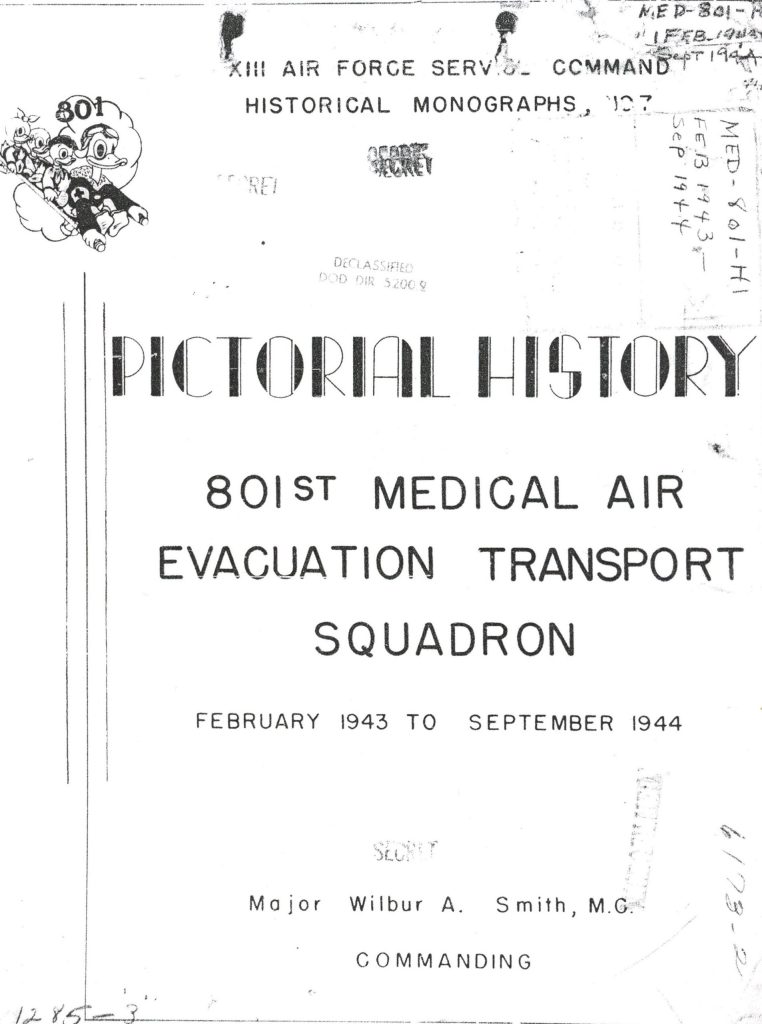 Typewriters could be an issue when not available in adequate numbers to keep up with record keeping; an 801 MAETS historical report recommended that a standard desk typewriter be authorized, for “The vast volume of evacuation records, reports and statistics in addition to the routine squadron reports and records [that] is too great to be done on one small portable [authorized] typewriter.” 1 When additional typewriters did arrive, parts were not always available for their repair. The 801 MAETS commander Wilber Smith thought it might be necessary to request additional officers, clerks and typewriters to deal with directives concerning the Historical and Public Relations Programs – “problems not foreseen by those who plan tactical units”.  2 Occasionally, the unit history was handwritten. The 817 MAES historian noted that April was a “banner month in keeping all our typewriter literally working busily day and night” preparing patient manifests, flight nurse per diem vouchers, enlisted men’s pay rolls, and various correspondence. 3 When the 804 MAES received a typewriter as authorized equipment in October 1944 after a 2–month wait, the administrative division treated it “as if it had been made of gold – and well it might have been if the effort expended in obtaining it was any indication”. 4 And word of an additional typewriter added to the 820 MAES equipment in August 1944 was received with joy, for as the squadron historian wrote, “The problem of typewriters has been one of the biggest headaches in the organization” with the 1 portable typewriter authorized. 5 Even if used 24 hours a day, preparing all the reports, surveys, forms, and correspondence would be a physical impossibility. 6

Additional factors must be considered. Some of the novelty of air evacuation may have worn off as the war progressed and air evacuation operations became more efficient and more routine. More likely, however, as the pace of the war increased, MAETS that relocated frequently in support of the moves toward Germany and toward Japan may have lacked the necessary resources and time to devote much attention to paperwork and record keeping. 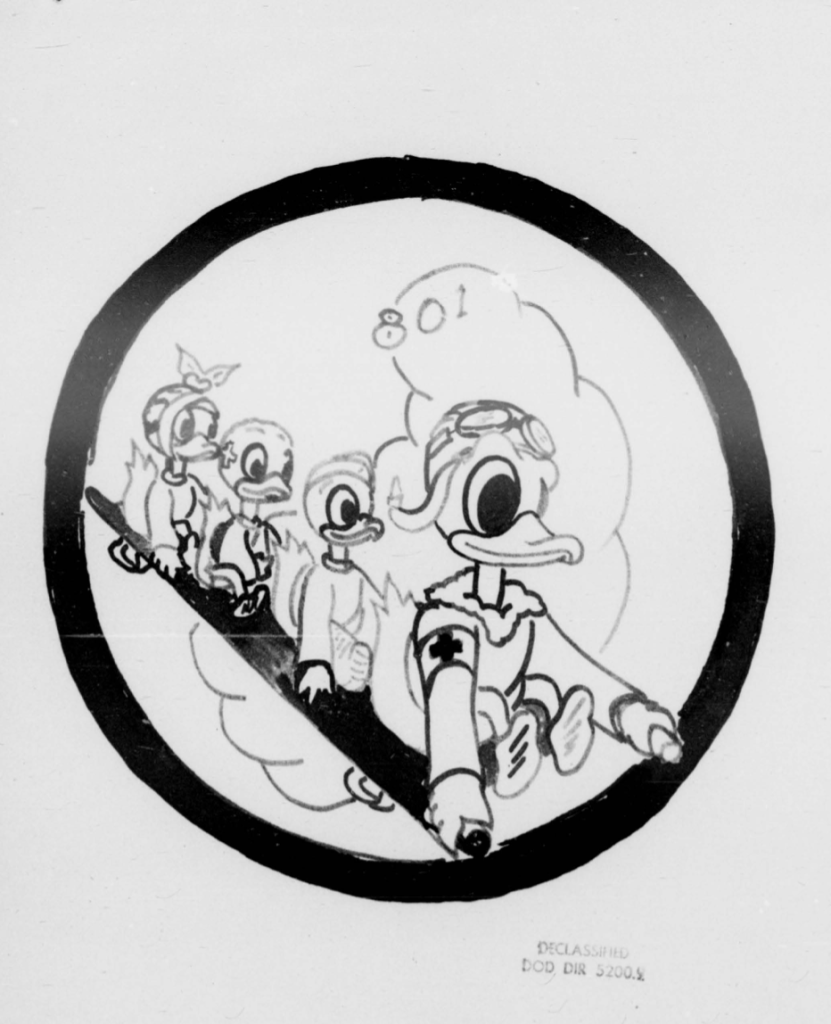 The first MAETS sent overseas were aware of their responsibilities as trailblazers “in a new and untried field” to assure that air evacuation functioned as efficiently as possible in the novel wartime scenarios in which they were placed. 7 Reports beneficial to improving air evacuation policies and procedures were included in historical reports regarding, such as the 801 MAETS “Types of Patients Evacuated and the Problems Encountered”: chest cases do well in flight; abdominal wounds give the most trouble during flight; unless markedly excited, mental patients can be transported safely if adequately sedated and restrained; malaria patients are prone to chills; active bleeding of duodenal or gastric ulcers is a contraindication to air evacuation; and burn cases and fractures are ideal for air evacuation because of rapidity of transit, smoothness of trip and lack of trauma. 8

Citing a 1 April 1943 report by Intelligence Officer Robert C. Duffy, the 801 MAETS historian applied “Physical and Mental Effects on Crew Members to Their Task of Flying Under All Conditions in This Area” to the flying personnel of the unit and recommended that “Medical personnel on air evacuation flights should be considered as being part of the air crew. They are subject to the same risks, physical hardships and mental strain as other crew members.” All personnel of the 801 MAETS were showing mild evidence of the strain resulting from these factors that rest leaves should alleviate, the report continued, and referring specifically to the flight nurses, added, “These factors are great in this theater, and it is recommended that replacements be made available at the end of one year of overseas duty.” 9

The 801 MAETS made recommendations “for changes and additions in personnel, operations and equipment” based on their first 7 months in the South Pacific Area. 10 For instance, the squadron designed “A Simple Medical Air Ambulance Kit” easily made in a parachute shop to meet the 801 MAETS needs, described in detail in a squadron history for the benefit of other squadrons. Primary concerns were the lack of coordination regarding patients needing evacuation from forward areas leading to inefficient use of planes and air evacuation personnel. The MAETS was operating under Navy control which hampered the squadron’s ability to do its work effectively. At one point although all planes carried air evacuation personnel, about half of the flights were dry runs, because patients were given a low priority for transport, putting air evacuation personnel at needless risk.

Most troubling was the misuse of flight nurses who were not permitted by the Navy to fly into islands where their services were most needed for air evacuation due to concerns for safety and unavailability of adequate quarters and toilet facilities for the nurses. “The use of nurses in air evacuation is feasible and practical,” an 801 MAETS historical report stated. “There should be no contraindication to their use in active zones of combat, provided adequate security is provided.” 11 Because the squadron was placed placement under the Navy–operated South Pacific Combat Air Transport Command (SCAT) and did not operate as a separate unit, the 801 MAETS nurses were not used to their full advantage. If the flight nurses were not allowed to evacuate patients from forward areas, “their training and skill [would] be wasted on ambulatory patients being evacuated from the rear areas, who hardly need medical attention at all”. 12 The MAETS commander recommended “that the skill, training and professional ability of these nurses warrants their employment in caring for sick patients where necessary” in the most advanced areas, where flight nurse operations should be unrestricted. 13

Other recommendations were more easily achieved. After a crash landing in which an 801 MAETS flight surgeon was thrown from the plane and did not have access to medications, air evacuation personnel began carrying morphine in their pockets so that if they had to exit the plane quickly without other supplies in a crash landing, they at least could offer pain relief to patients and injured crew members. And carrying 2 units of plasma on each air evacuation plane and training personnel on its administration for emergency use was a valuable life–saving measure in flight.

In some squadrons a flight nurse, often the chief nurse, was given the additional duty of historical officer or was allotted a section of the unit history devoted to flight nurse activities. Such was the case in the 801 MAETS, when flight nurses Nancy Preston and Ada Endres offered “The Feminine Side” of their squadron in the Pacific in its August 1944 historical report. Chief nurses Catherine Grogan and Grace Stakeman were unit historians for the 802 MAETS in North Africa and the 807 MAETS in the Mediterranean, respectively, and in the 821 MAETS in the CBI, Katherine Hack contributed to the Nurses Section of the historical report. In the United Kingdom, flight nurse June Sanders was unit historian for the 819 MAETS; when she was hospitalized, Chief nurse Phoebe La Munyan served as Acting Historian to write about flight nurse activities. La Munyan waxed poetic in her October 1945 ‘tongue-in-cheek’ “Ode to Squadron Histories”:

Uncensored, beauteous manuscript of undetermined style:
Outlet for a thousand woes which make the best souls rile;
Confessor of a thousand sins found in no other file;
I wonder if you realize you’re very much worthwhile!

For any transgression, we make a confession,
Or turn (we hope) “subtle” accuser.
To right supposed wrongs, we type out our songs
Attempting to crush the abu[s]er.

You’re not just a recorder of events, or a hoarder
of morning reports and S.O.’s!
You’re our steam valve escape to keep us in shape –
Sup[p]ress tempers no matter what goes.

You help us coordinate, suppress insubordinate[s],
Stop court martials ’fore they begin.
Though designed for Posterity, it appears with true clarity,
You quiet the present’s mad din.

So we stop to salute – Take time out enroute
As we pour forth this latest edition.
We scrawl out this tri[p]e and spread on our gripe
In accordance with army tradition! 14

I did the bulk of my research on MAETS historical reports at the Air Force Historical Research Agency (AFHRA) at Maxwell AFB, AL, where microfilm copies of MAETS historical reports are available. Some pages of those documents are unreadable, others barely so – perhaps as carbon copies of original documents. Digital copies scanned from the microfilms have not improved the clarity. Other documents are archived at the Army Medical Department Museum (AMEDD) in San Antonio, TX. This series of Blogs is based on what documentation was readable and relevant, especially as it regards the flight nurses of the MAETS.