My visit to St Petersburg, Florida to interview Mary Christian was an adventure of rain and a rental car in unknown territory. After flying into Melbourne, Florida the evening before the interview, I drove a rental car to St Petersburg before stopping for the night. There was a light rain but no traffic, so I took advantage of the situation and kept driving until I reached St Petersburg just before midnight. The morning of the interview began with a downpour, but it let up just before I left the motel to find Mary’s home in the southern part of the city.

Mary had collected her scrapbooks, which we looked through prior to the interview. She requested a break during the interview, because she was becoming shaky—she had been ill and was currently on medications. All she needed, she said, was to eat some lunch. She had mentioned in an earlier telephone conversation that she would fix us a light lunch, so we ate sandwiches and sherbet and talked about vacations. Mary has been to Europe six times since her husband died in 1981 and was very interested to learn of my upcoming trip to England. She even gave me some suggestions about clothes to pack.

Mary’s background is unique among the interviewees, for as a civilian nurse, she had been a member of the Aerial Nurse Corps of America, which pilot Lauretta Schimmoler founded in the 1930s. Volunteer nurses in this organization provided first aid at air meets and occasionally accompanied patients needing air evacuation. When Mary wanted a change from her work as an industrial nurse, she joined the military and was sent immediately to Bowman Field, Kentucky to train as a flight nurse.

After lunch we continued the interview. Mary talked easily and appeared to enjoy reminiscing about her assignment as a flight nurse in World War II. Her memories are fond ones: she had been sent at military expense to exactly where she’d always wanted to go, to do what she really wanted to do—flight nursing. And she met her husband to boot.

Mary mentioned how delighted she was that I’d come—I had helped her to recall long-buried memories that she thought she’d forgotten. She was concerned, however, that what she had talked about might be too frivolous to be of interest to anyone. We discussed this and came to the conclusion that rather than sounding frivolous, the interview would reveal the human element often lacking in books and articles on flight nursing in World War II.

One of Mary’s stories: When stationed in Alaska, Mary lost many of her friends in a military plane crash at Whitehorse. She and another flight nurse were supposed to be on board a B-17 that was being cold-weather tested, but they were in town and missed the call. The dentist and his assistant went on the flight instead. The carburetors iced up, and the plane went down on a lake. The people who stayed by the plane survived; those who tried to swim drowned. “And this was a group of people that we had been out on a picnic with the night before it happened. So it was a sad and an emotional type of thing to go through that,” Mary added. But she and her colleagues “just went on. We were accustomed to going on no matter what. That was one of the first things that we learned, that you just go, and keep on going. You can’t let your emotions control your life. After our years in nurses training before going into service, that was one of the things, that we had to learn to control our emotions, or you were no good as a nurse.” 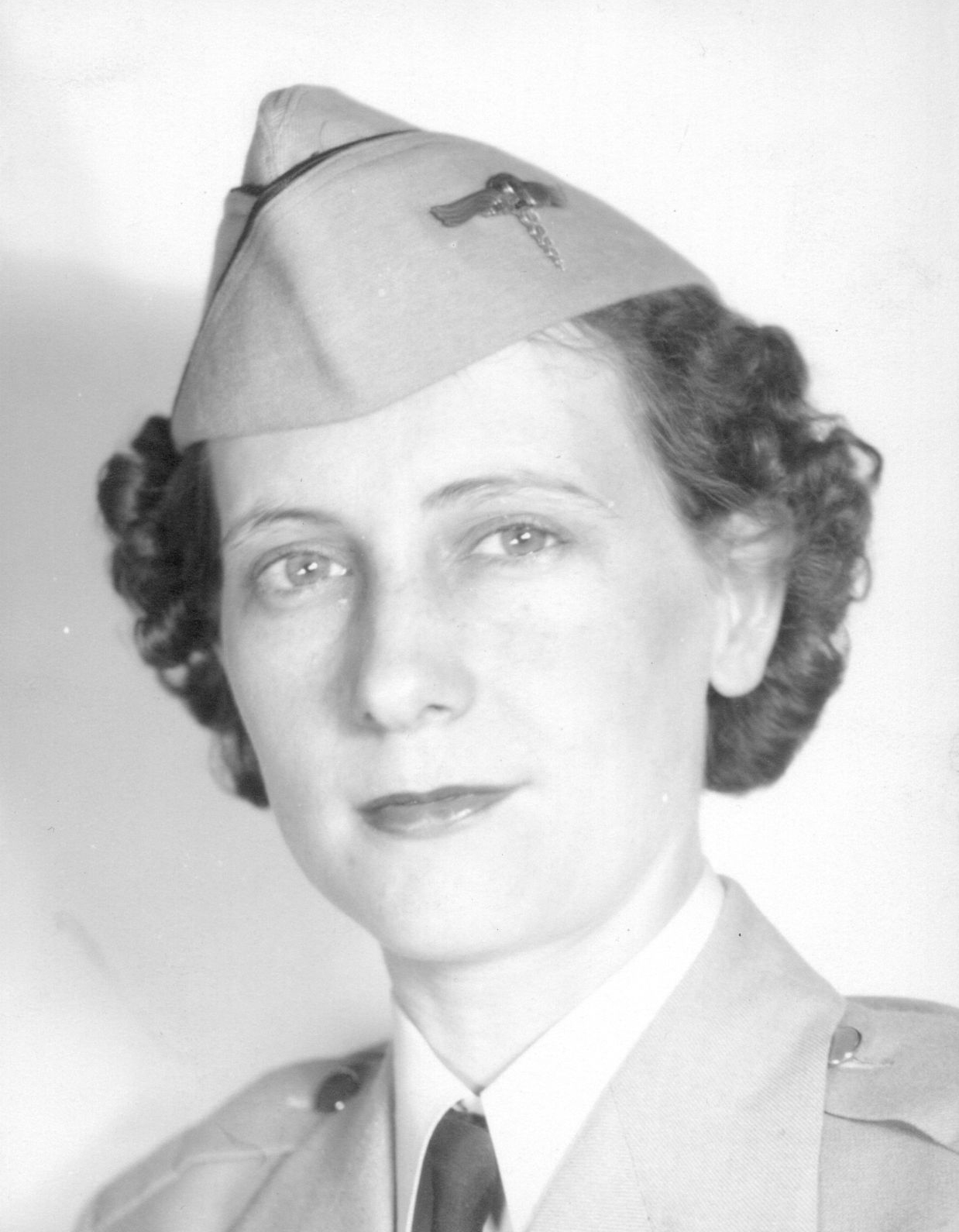 Mary Eileen Newbeck in her civilian Aerial Nurse Corps of America uniform prior to joining the army. (Author’s private collection)